That's the question researchers at the Western College of Veterinary Medicine (WCVM) are looking to answer in a trial that's currently underway at the University of Saskatchewan's Rayner Dairy Research and Teaching Facility.

"We're investigating dairy cow use of automatic brushes," explains Joe Stookey, a cattle behaviourist and professor at the WCVM. "What we are looking for specifically is the pattern of their use — whether they use it daily, how frequently they use it, and whether that use changes with lameness or illness."

Automatic brushes are becoming a standard in free stall dairy barns and are available to the cows whenever they're in their home pens. Once the brush has been activated by the cow, it begins to spin and provides grooming opportunities for those hard-to-reach places such as the back, hindquarters and tail.

By pairing an individual lameness assessment with an observational study of each dairy cow's interaction with the brush, the study seeks to characterize the cow's daily brush use, looking for any indications of early lameness.

"If they do use the brushes every day and then that changes — they start using it less or more during a lameness or injury — you could use that as an early detector," explains Stookey. 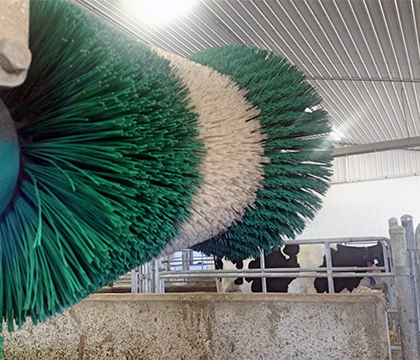 Looking for lameness in every cow in a dairy herd is time consuming, and the stoic nature of cattle often makes subtle lameness challenging to detect. As a result, lame cows can often go undetected until their lameness has progressed and become more severe. Since severe lameness is often difficult to resolve and more likely to become a chronic problem, early detection and treatment are key.

To carry out the project, the researchers installed surveillance cameras in the barn so they could have an around-the-clock record of the cows using the brushes. The team also learned how to visually assess the movement of cattle so they could determine when a cow is sore or lame. A cow that has a sore foot will shift its weight and try to take weight off that foot, resulting in a limp.

As automated detection is gaining popularity in the dairy industry, activity monitors are widely used to detect cows coming into heat for breeding purposes. Sensors in milking systems are also used to provide information about milk quality and udder health.

That's why it's not such a stretch of the imagination to envision that the observation of automatic brush use could be another step toward improved animal care. If the producer is alerted whenever a change in brush use occurs, there's a greater chance of detecting lameness problems before they become severe.

Deanna Larsen of Edmonton, Alta., is a second-year veterinary student who was part of the WCVM's Undergraduate Summer Research and Leadership program in 2016. Deanna's story is part of a series of stories written by WCVM summer research students.