While mild cases of colic usually resolve with medical treatment, surgery can be the only option for treating horses suffering from severe colic.

Researchers at the University of Saskatchewan's Western College of Veterinary Medicine (WCVM) are working to help horses that undergo colic surgery by introducing new methods and techniques.

Because many traditional colic surgeries are very invasive and require general anesthesia, equine surgical specialists are investigating new laparoscopic techniques that can be performed on standing, sedated horses with a local anesthetic.

One such study is being done by Dr. Joe Bracamonte, an assistant professor of large animal surgery at the WCVM. With support from the WCVM's Equine Health Research Fund, Bracamonte is comparing traditional laparoscopic suturing — where two needle drivers are used as "hands" to manipulate a large curved needle — with suturing done using a specialized tool called the EndoStitch™. 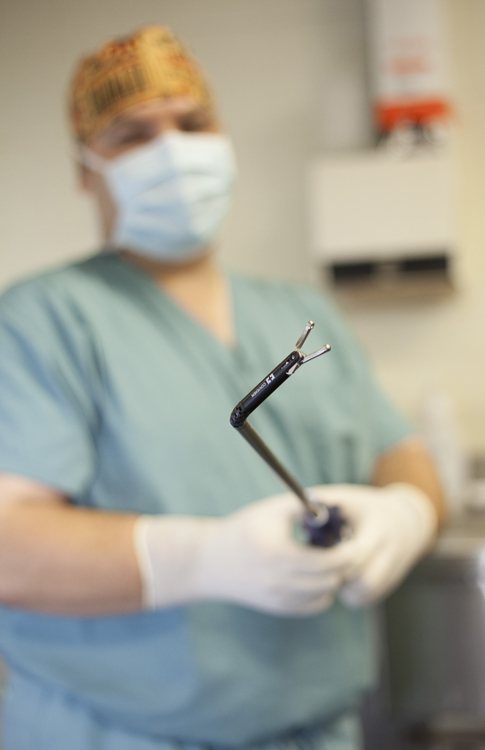 This type of colic is less common than other types, but the rate of recurrence is high. Treatment options range from using drugs to shrink the spleen to surgical closure of the nephrosplenic space. When the spleen is successfully sutured to its neighbouring ligament, a smooth adhesion forms that the bowel can slide away from.

During the project, the WCVM researchers surgically closed the nephrosplenic spaces in five horses. Four weeks after the initial surgery, the surgical team conducted follow-up laparoscopies to view the adhesions that formed and to determine if the initial surgeries were successful.

The study was a collaborative process involving third-year student Nicholas Hawkins as the camera operator in the laparoscopies. It also dovetailed with anesthesiologist Dr. Tanya Duke's study investigating the efficiency of a new anesthetic procedure.

Although laparoscopic surgery is less invasive for the horse, it presents more complications for the surgeon. As Bracamonte points out, it requires practice to manipulate a needle at the end of two pincers about half a metre away with only a television screen to show where you're going.

That steep learning curve is the main reason behind Bracamonte's drive to make this type of suturing more accessible for equine surgeons.

"I may go two years before I get the opportunity to do this surgery in a regular  [equine] practice," explains Bracamonte. "Whereas a human surgeon, if they're a specialist, could be practising 100 surgeries a month."

The EndoStitch™ was created to help surgeons manage intercorporeal sutures more efficiently. The device has an alligator-style jaw on one end that passes a needle and thread back and forth through the tissue that's being sutured, and it works a bit like a single-thread sewing machine. 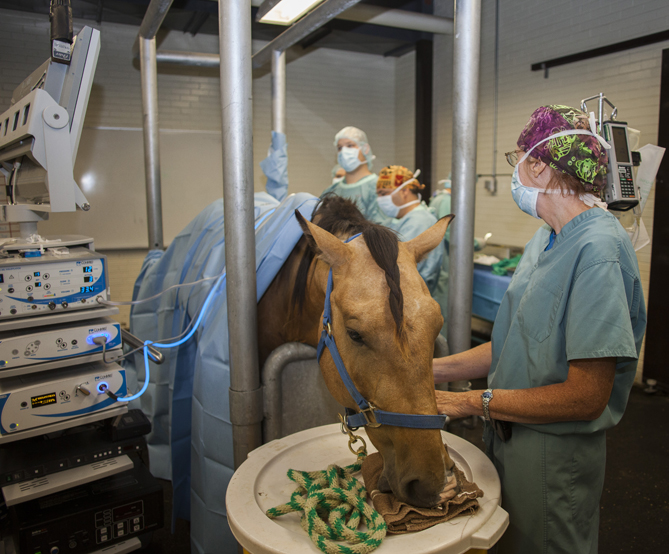 Veterinary surgeons have successfully used Endostitch™ for other laparoscopic surgeries (such as cryptorchid procedures and ovariectomies). Thanks to feedback from Bracamonte and others, an updated version is 15 centimetres longer and has a head that flexes sideways.

During a traditional surgery where an anesthetized horse is lying down, the patient's abdomen is insufflated with carbon dioxide so it's taut like the surface of a balloon. The surgical table can also be tilted so the horse's internal organs "slide" out of the way. The result is that the surgeon can safely and easily cut through the abdominal wall without fear of damaging anything inside.

This isn't the case with standing laparoscopy where there's a very small margin for error.

"Our working space is this little triangle [in the horse's flank]," says Bracamonte. "I tell students the first cut with laparoscopy is like flying a plane. You have to be sure of your take off and your landing."

During the project's standing surgeries, Bracamonte and Hawkins encountered one of their first challenges as they made the first cut through the abdominal wall so they could insert the laparoscopic portals.

The tool that surgeons use to make this first cut is a knife that's designed to spring back into its sheath after cutting through the abdominal wall (to avoid hitting internal organs). Bracamonte eventually discovered that the tension on the horse's abdominal wall during a standing surgery wasn't great enough to cause the spring to engage. The knife wasn't retracting after the first cut — a complication that delayed several of the surgeries before the problem was properly diagnosed. 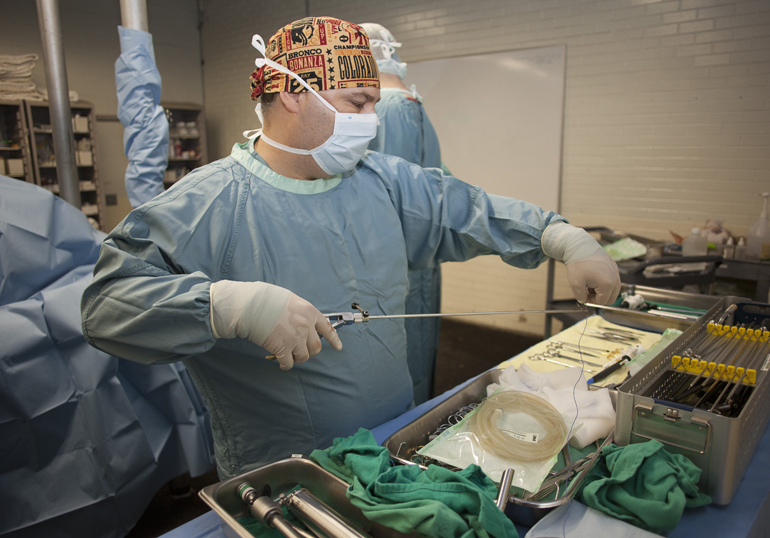 "That's research," Bracamonte says as he shrugs philosophically. "That's the challenge – the problems you're faced with, how you overcome them, and how you can then bring those solutions back to clinical situations."

Although there have been many successes on the road to developing a less invasive surgery for closing the nephrosplenic space, preliminary results indicated that the Endostitch™ wasn't the best choice for this type of surgery.

"Because the current EndoStitch™ needle is so small, you risk tearing the tissue [due to the tension put on the sutures]. With a large curved needle, you can take a nice big bite and it comes together nicely," says Bracamonte. "It has a lot of advantages in other places where you're doing intercorporeal sutures, but it's not going to offer those advantages with this particular surgery."

Results of the "second-look laparoscopy" for horses that had the EndoStitch™ surgery are more promising than expected, however. In those three research horses, researchers found that a complete adhesion was formed between the spleen and the nephrosplenic space.

"Nevertheless, we still believe that the major limitation in using the EndoStitch™ for this surgery is the small size needle which makes closing the space challenging because of the tension and potential tearing of the tissues," adds Bracamonte.