Dr. James Belknap, a professor in Veterinary Clinical Sciences at Ohio State University and a well-known researcher in the field of equine laminitis, talked about the disease during a special presentation at the Western College of Veterinary Medicine (WCVM) in September 2012.

As Belknap explained, equine laminitis can be a devastating result of many different disease processes in the horse. This painful condition occurs when the horse's laminae-interweaving folds of tissue — the connection of the coffin bone to the hoof wall — separate. 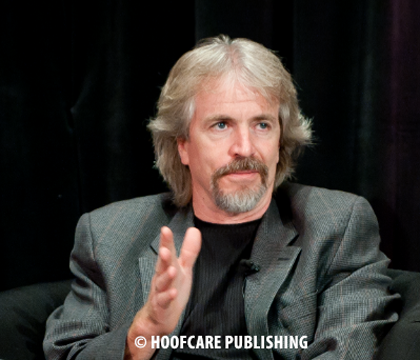 The severity of laminitis can run the gamut from a few days of discomfort in mild cases, to severe, prolonged pain and the perforation of the coffin bone through the bottom of the foot in extreme cases, which are often humanely euthanized.

Here's a recap of the concepts that Belknap touched on during his lecture along with references to a summary of basic laminitis facts that the equine surgeon wrote in 2012.

The past few decades have seen a marked increase in efforts to understand the various causes of laminitis. "Due to these recent studies, our understanding regarding the pathophysiology of this devastating disease has greatly improved," explained Belknap.

Circumstances that can trigger laminitis are well known to horse owners and veterinarians alike:

Researchers are only beginning to unravel the chain of cellular reactions that allow the separation of the laminar tissues. Much of the recent advancement in the understanding of laminitis is possible, thanks to advances in the fields of molecular biology and immunohistochemistry.

With these research tools, scientists can detect cellular events occurring in the laminar tissue resulting in laminar failure. For instance, in sepsis-related laminitis, researchers have characterized an intense, inflammatory signalling response that occurs in the laminae (and likely leads to laminar failure).

Slowly, researchers are piecing together what takes place in the hoof when laminitis starts. They're able to pinpoint it earlier in the process, and they have the ability to see which treatments show promise and which should be discarded. They're also better able to understand laminitis as a response to what's happening elsewhere in the horse's body.

What studies have shown is that a systemic inflammatory response occurs in the horse with sepsis-related laminitis. The initial cause is a "remote insult," such as uterine infection, that sets off changes in the laminae. Scientists now recognize that laminitis isn't a disease only of the foot: in most cases, it's a symptom of inflammation happening throughout the horse's entire body.

Armed with this new knowledge, equine researchers can align their work with similar studies coming from the human medical and laboratory animal research fields.

In horses, the target is the laminar tissues. This is an advantage as the tissues are peripheral and can be treated without affecting the horse's internal organs.

With new knowledge in hand about how and why laminitis begins, researchers are attempting to clarify many previously controversial therapies for treating laminitis including different drug therapies.

For example, many drugs that have been used for many years to increase blood supply to the affected foot have now been demonstrated to be ineffective. Other drug therapies, such as corticoids and heparin, remain controversial. More research is needed to determine exactly how they interact with the disease.

One of the only treatments that is effective in treating sepsis-related disease in the horse or human has been distal limb cold therapy. For laminitis, the veterinary team immerses the horse's affected leg(s) in ice water for 48 to 72 hours after its exposure to a laminitis trigger.

In human medicine, researchers have assessed cold therapy but it's not used to block organ injury in human sepsis because there are too many side effects associated with hypothermia. In contrast, the digital laminae — the peripheral target organs in the horse — can be made hypothermic without affecting the rest of the body.

Based on research conducted by Belknap and his colleagues, their recommendation is simple: the earlier a horse suspected to be at risk for laminitis starts cold therapy, the better the chances are of avoiding laminitis entirely. They have demonstrated that the cold therapy eliminates the majority of "deleterious inflammatory signalling" in the septic horse's digit (foot).

It's not yet known, however, whether the effects of cold therapy are beneficial only because they inhibit the inflammatory response or because of its additional effect on other factors .

One possible treatment that remains to be studied is "regional intravenous perfusion" (RIP). In theory, this treatment delivers a concentrated dose of drugs to the affected laminar tissue while avoiding damaging consequences elsewhere in the body — something that's not possible to do in rats or humans when the affected tissue is the lungs or kidneys.

Thanks to a strong collaborative network in the field, real advances are being made in laminitis research. Not only is research being shared among peers, it's being shared with the public as well. For example, with a grant from the British Equine Veterinary Association Trust, the Equine Veterinary Journal has recently provided free online access to a collection of laminitis-related research papers.