This city girl, who spent nearly all her time with small animals and didn't truly realize pigs got any larger than the title character in Babe, was instantly charmed by pigs' intelligence and insatiable curiosity.

Piglets as young as three days old and no bigger than my foot romped and played like puppies, while sows standing as tall as my hip leaned into me as I scratched their ears.

Two years later, I worked to address one of the swine industry's hottest topics of welfare – swine castration — as part of my summer research project at the Western College of Veterinary Medicine (WCVM) where I'm a second-year student.

Although current news reports focus on the elimination of sows' gestation stalls, concerns about routine painful procedures being performed without pain control has been simmering in the background, says WCVM professor Dr. Joseph Stookey, an expert on farm animal behaviour and welfare.

Besides castration, the list includes standard practices such as ear notching, tail docking and teeth clipping.

Brian Andries, barn manager at PSC, doesn't deny that castration is a painful procedure, but he confirms that it's a necessary one. He explains that uncastrated males at market weight produce a pork product with a unique flavour called "boar taint" that isn't acceptable in the retail market.

Physiological measures such as blood analysis are often used in pain evaluation studies but are invasive and can add to the animal's distress. In contrast, measuring behaviour can be a non-invasive and inexpensive alternative.

"As long as the behaviours being measured are true indicators of pain, it makes them good candidates for conducting pain research," says Stookey. 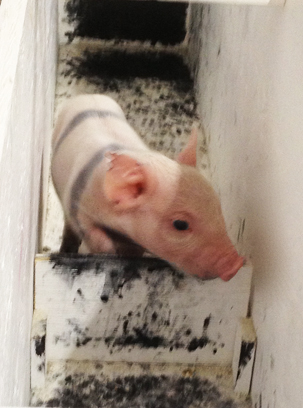 My research project's goal was to discover a specific behaviour that differs between piglets in pain (as a result of castration) compared to those that are not in pain, and to validate that behaviour as a reliable indicator of pain. Such a measure would be a very useful tool in future research into ways of improving pain mediation at castration.

When you observe piglet behaviour in their home pens after castration, a key problem is that the animals' pain-related behaviour can be subtle and hard to detect. By measuring pain via a behavioural test, we aim to have a more reliable and consistent method of pain evaluation for young piglets.

All of the piglets used in my project were trained to transverse a chute containing two four-inch hurdles. Piglets needed to walk down and clear the hurdles before exiting the chute and returning to their mother. I observed the piglets' stride lengths and the time they took to pass through the chute.

In the first phase of my project, I treated 30 five-day-old male piglets with castration or sham castration. Other than not performing the procedure, I handled the sham-castrated pigs similarly to the castrated animals.

Once I found a behavioural measure of castration-related pain, I administered a pain control drug (injectable Metacam®) to piglets one hour before castration and examined the drug's effect on the animals' behaviour in the chute. During this phase, I divided 68 male piglets among four treatments: sham castration, castration without Metacam®, castration with a half dose of the drug and castration with a full dose.

Preliminary findings show that castrated piglets take a greater amount of time to navigate the chute than sham-castrated animals. Additionally, piglets that received a half or full dose of pain control drug had shorter navigation times — similar to those that weren't castrated.

These findings suggest that the duration of time taken to transverse a hurdle chute is an effective measure to assess castration-related pain in piglets. It also indicates that a pain-killing drug such as Metacam® does lessen the post-operative pain in male piglets following castration, thus promoting their overall welfare.

Ideally, my study and others like it will contribute to developing suitable husbandry practices that help to improve animal welfare. However, Andries wants consumers to be prepared for a higher price tag for pork since these changes can't be made without an additional cost to swine producers.

As researchers, we hope to find a means for producers to address welfare concerns and to incorporate pain management into all painful procedures in such a way that's practical and cost-effective for small and large swine barns.

As a future veterinarian as well as a welfare and behaviour enthusiast, I'm excited to be part of the swine welfare discussion. As well, I hope that my enthusiasm might inspire others to work with pigs.

From my perspective, any species that at five days of age can bounce out of a plastic tub three times their height, pass through a chute with two hurdles in less than two seconds and return to explore the chute from the other end is surely worthy of our attention.

Kayla Bilsborrow of Sherwood Park, Alta., is a second-year veterinary student who participated in the WCVM's Undergraduate Summer Research and Leadership program in 2013.