Vaughan's research aims to determine if dairy cattle are capable of learning how to urinate and defecate in designated areas.

"A lot of the problems encountered in the dairy industry like lameness and mastitis go back to cleanliness," Vaughan says. "If we could train the cattle on where to urinate and defecate, their bedding could stay dry and clean and greatly reduce those risks."

Ultimately Vaughan hopes to see the training process automated for use on dairy farms, eliminating urine and feces in milking parlours and simplifying waste removal.

Vaughan conducted a 17-day testing period on six one- to two-month-old Holstein calves in which they were given milk as their reward for urinating in the correct area. Audio, visual and spatial cues were used as secondary reinforcers — much like the clicker's function in clicker training. The study alternated between training and testing the calves depending on the previous day's result.

Day one involved each calf being put into an experimental stall and given a diuretic to ensure urination. While the calf was urinating, a buzzer sounded and a gate opened to the exit. A large coloured board with a milk teat was present in the "reward" exit as well as sawdust bedding.

"We needed the first test to be a positive experience for all of the calves," Vaughan says. 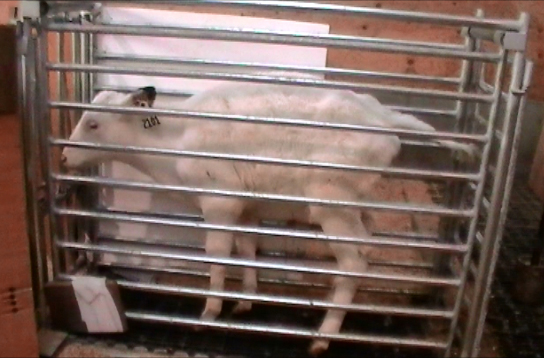 The second day was a test. Calves were placed in the same pen, this time without a diuretic. Those who urinated within the 15 minutes experienced the same reward sequence as the previous day. If the calf did not urinate, the gate swung the opposite direction to a "time out" pen where the calves were kept for five minutes with no reward.

The calves that failed repeated the training sequence with the diuretic from the first day and those that urinated continued being tested. This pattern continued for the duration of the experiment.

"I wanted to see consecutive days of them urinating and being rewarded so I knew that they were learning the behaviour," Vaughan says.

The project was a success: five out of six trained calves urinated significantly more often in the stall than their control. Vaughan's results ranged from exceptional, in a calf that consistently urinated within the time frame, to poor, as one of the calves did not seem to catch on.

"Animals are individual," Vaughan explains. "The key thing for decreasing the margin of error is finding what is motivating them."

Some calves respond better to being deprived of milk for a short time before going into the urination pen.

Vaughan describes the process in which the calves master basic skills and then move on to more complex ones as "learning to learn."

She believes that an automated system of toilet-training cattle is a practical step for the dairy industry to take and has received a positive response from dairy producers.

"[Dairy producers] want to be confident it would work for them. We need to be able to show them that a high percentage of their animals will be able to learn."

Now in its second year, this research is still very new and there's work to be done before bringing it to the producer level. Vaughan hopes to be exploring methods of automation by the end of her graduate program in October 2014.

"We know that we can toilet train animals, but we need to know if we can automate the training so no extra work is created for the farmer."

This isn't the first research attempt at toilet-training cattle, but Vaughan can explain why others have been unsuccessful.

"In one study, the cattle were supposed to urinate in a designated area on concrete," she says. "If you watch a cow urinate on concrete, she positions her body away from the splatter and is rather uncomfortable. A key element of our research is making the cattle as comfortable and stress-free as possible."

Vaughan doesn't believe that this technology will be labour-intensive or expensive for dairy producers to adopt, and it would be widely beneficial in waste management and cleanliness.

"Producers were very keen on having no urine or feces in the milking parlor," Vaughan says who would also like to eventually explore the separate collection of urine and feces to reduce the ammonia gas that's emitted when the two mix.

With the calves from her initial study now at eight months old, Vaughan plans to conduct another series of experiments to see if they remember the urination behaviour they learned six months ago.

"At this point, we have learned a lot about the learning capabilities and motivations of the calves," Vaughan says. "Now we need to know if this can become an automated system that dairy farmers can use."

Vaughan's research is supervised by Dr. Joe Stookey of the WCVM as well as Drs. Jeffrey Rushen and Anne Marie De Passillé at Agriculture and Agri-Food Canada in Agassiz, B.C.

Rosie Templeton grew up on a Hereford cattle ranch and grain farm near Coaldale, Alberta. She is currently studying Agricultural Communications and Agribusiness at Oklahoma State University. She can be found on Twitter @rotempleton.