"My research program is at the interface between wildlife and agriculture," said Ryan Brook, assistant professor in the College of Agriculture and Bioresources. "So when I came to the U of S three years ago, I looked at what major issues are facing producers and what issues have the potential to be major."


At first, Brook looked at elk that came into cattle areas and the costs associated with them feeding as well as the transmission of diseases like chronic wasting disease. When he started thinking about long-term issues, Brook settled on wild boars and moose as two mammals posing potentially significant problems.

Moose on the Move

Although most think of moose as a species specific to boreal forests, over the past 15 years the animals have been moving more and more into farmland, Brook said.

"They cause considerable crop and property damage. Farmers have reported seeing moose eating flax, canola and field peas. They love peas. But most importantly are the vehicle collisions." 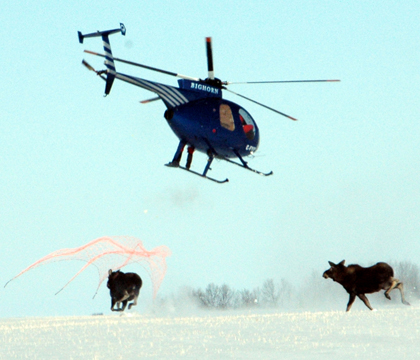 By capturing moose in the province, outfitting them with satellite-based collars and then tracking them over a two-year period, Brook is hoping to determine why the moose crossed the road.

"The big questions are why have they moved into these new habitats and why and where do they cross roads. Are there highways that have a higher risk and is that related to too little shoulder cover, or the type of crops close by, or even road salts?"

In the U.S., wild boars are responsible for billions of dollars in damage to agricultural crops, Brook explained.

"They will eat anything. They are also rooters and will dig with their noses and this causes damage to native ecosystems. Not to mention they are aggressive and will harass livestock."

Wild boars are a potential source of diseases, too, he continued. "The outbreak of E. coli  in spinach in California a few years ago was tied to wild boars coming into the area and spreading E. coli. In Spain, they are a major reservoir of bovine tuberculosis." 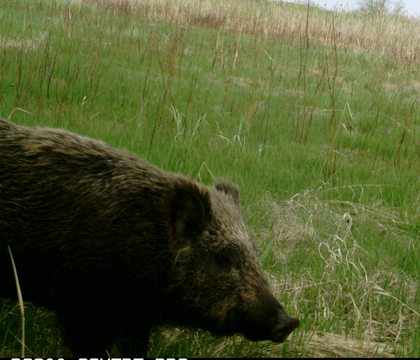 Wild boars are still a relatively small problem in Saskatchewan but their population numbers could explode very quickly, Brook said.

"They could be a really significant problem in Saskatchewan. They are the most prolific reproducer of any large mammal in the world. Females on average have 12 offspring each year and can reproduce at six months of age. They have no natural predators in Canada that we are aware of (so) the survival rate is quite good. All of these factor contribute to the problem."

Brook has set up a series of trail cameras around Saskatchewan to gather information on where they are in the province, reproductive rates, habitat use and how the boars affect other animal populations. He is also surveying rural municipalities to get an idea of what they are seeing on the wild boar front. All of this, he continued, will contribute to a better provincial picture.

What Brook does know is that to curb the wild boar population, you have to be aggressive. "In California, they kill 60 per cent of the entire population every year just to keep it at the same level year to year."

View the original story on news.usask.ca, news site for the University of Saskatchewan. Reposted with permission from On Campus News.