But do these procedures actually work?

Researchers at the Western College of Veterinary Medicine (WCVM) recently addressed one aspect of that question, looking at acupuncture as a method of pain control for caudal heel pain (commonly known as navicular disease) in horses.

Dr. Kate Robinson, a resident in equine field service, completed the project as part of her Master of Veterinary Science program. The WCVM's Equine Health Research Fund provided financial support for Robinson's research that she conducted with her supervisor, Dr. Steve Manning.

Caudal heel pain can encompass a range of injuries and disease processes in the horse's heel bulbs that may or may not involve degeneration of the navicular bone. Typically the pain is progressive and can only be managed, not cured — hence the search for drug-free pain management techniques.

"Acupuncture in general is the most widely used alternative therapy in horses. It's seen a real increase in popularity in the last 10 years," says Manning, a field service veterinarian and associate professor in the WCVM's Department of Large Animal Clinical Sciences.

Manning, who has training in acupuncture practices, administered the study's treatments while Robinson performed ongoing assessments of each horse's progress. The double-blind study meant that Robinson didn't know which horses were receiving treatments and Manning didn't find out the assessment results until the trial was over. 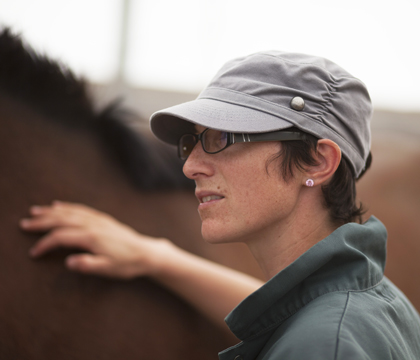 The study found that acupuncture treatments produced no significant difference in caudal heel pain in the study's subjects — but Robinson points out researchers and horse owners will still benefit from the study.

"It's important to investigate treatments such as this because we don't want to apply therapy that isn't going to work," explains Robinson.

"Most horses tolerate and even enjoy acupuncture treatment. But those who don't can be very explosive and dangerous, both to themselves and to their handlers."

Carrying out this type of study carries specific challenges. From an initial list of 43 possible equine candidates, about half were given an initial examination. Only 12 horses met the researchers' criteria and only nine were able to complete the study — five in the treatment group and four in the control group.

"We tried to find horses where the pain was isolated to the heel alone, where there were no other contributing issues," says Robinson. 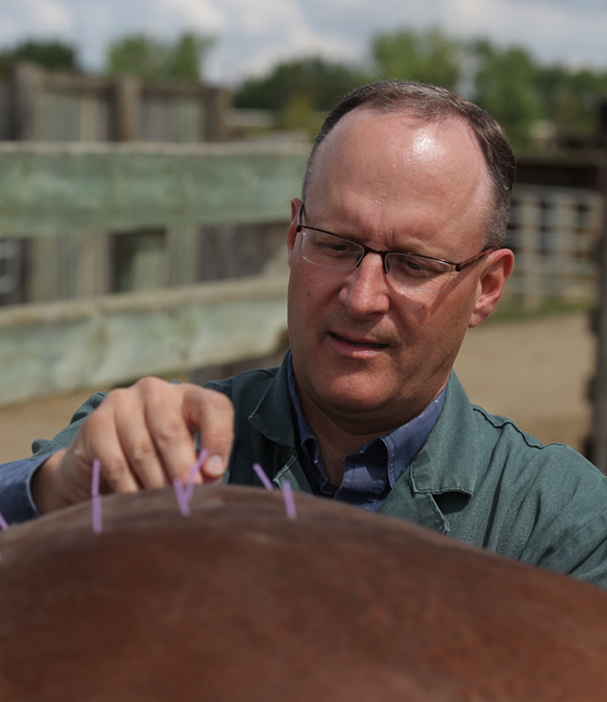 "We also needed horses that would not progress to a stage five lameness (non-weight-bearing lame) during the course of the trial for animal welfare reasons. We were hoping to target about 30 horses, but we just couldn't get the numbers."

Eligible horses received standardized treatment throughout the study. A farrier trimmed their feet, and they remained barefoot throughout the trial. The researchers took radiographs of the horses at the start and end of the trial, and they also conducted clinical lameness evaluations and hoof pressure analyses throughout the investigation. Electro-acupuncture and dry needle treatments were given for 20 minutes twice a week for a total of eight treatments.

A construction project prevented Robinson and Manning from using the WCVM's force plate — a computerized device used to measure the weight a horse puts on a hoof as it contacts the ground. However, the University of Saskatchewan's College of Engineering developed a handy new tool that measures the pounds-per-inch applied by a pair of hoof testers.

One option the researchers didn't investigate in their study is the use of magnetic resonance imaging (MRI) scans to provide a more accurate diagnosis of soft tissue involvement in caudal heel pain. Although MRI studies can help clinicians pinpoint the diagnosis and allows them to develop a more detailed prognosis and treatment plan, Robinson points out that this option may be too expensive for many horse owners.

Manning treated the study's horses with standardized acupuncture points in their heel, shoulder, neck and forearm.

"We picked specific types and lengths of acupuncture points that were said to be useful for this type of heel pain," says Manning, whose acupuncture training at Colorado State University was taught from more of a Western, science-based perspective.

"But from a traditional Chinese medicine (TCM) perspective, treatment plans can't be standardized. A TCM practitioner may come up with a unique plan for each horse they diagnose."

While acupuncture didn't appear to be effective in treating heel caudal pain, there are studies available showing that acupuncture often has benefits for horses suffering from muscular back pain. Both Robinson and Manning say this has been borne out by cases they've seen in their own practice.

"It's a good complementary therapy but it seems to have limited use," says Robinson. "It's most effectively used to treat primary or secondary back pain, and the research literature seems to agree."

Manning doesn't mince words when discussing alternative therapies. "They are largely unproven, over-sold, and over-prescribed. But acupuncture is certainly not the only thing that fits into that category. A lot of things we try fall into that category — both drug and non-drug therapies — which is why it's so important to continue with research."

Eventually Manning would like to develop an acupuncture component of study at the WCVM that would encompass both Eastern and Western medicine viewpoints. Backed by science-based research, the course would help to give veterinarians another tool for managing chronic pain issues in the most efficient and humane manner possible.