Earlier this year, the dynamic duo captured the honour of Reserve Champion (second place) at the 2013 National Amateur Retriever Championships that were held in Morin, Alta., in July.

Taylor reports that the competition was tough at the championships: 56 qualified dogs from across Canada and the United States were running the trial that consists of 10 grueling tests over a seven-day period. 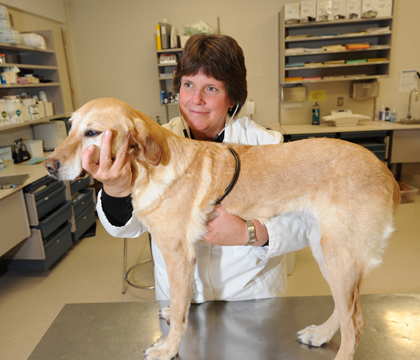 "The national championships is an elimination event — meaning that only the dogs that perform well on a given test are invited back to run the subsequent test," says Taylor. "Candy and I were finalists — we were invited to run the tenth and final test — and we ended up as Reserve Champion."

Taylor is internationally known for her research work targeting exercise-induced collapse in Labrador retrievers — a neuromuscular syndrome that the WCVM specialist has been investigating for nearly two decades.

Candy's mother was well known at the veterinary college, adds Taylor. "Some former veterinary students might be interested to know that Candy is the daughter of my old gal Breeze (now deceased) who helped me teach neurology labs to a whole generation of vet students during her 14.5-year career."