It's a follow up to the successful beagle study that tested peas as an ingredient for pet food. Researchers are hoping to demonstrate that by replacing corn (a common pet food ingredient) with pulses, they can achieve lower blood sugar levels in cats and dogs.

"Our overall goal is to find diets that provide a low glycemic index and all the health benefits that come with it," says WCVM research associate Kyla Zatti. She and graduate student Jennifer Briens are working with Dr. Lynn Weber, an associate professor in the Department of Veterinary Biomedical Sciences. The project team also includes Drs. Murray Drew and Tom Scott from the U of S College of Agriculture and Bioresources.

"When an animal (or human) eats starch, some of that starch is metabolized as sugar in the bloodstream," Zatti explains. "This rise in blood sugar levels is measured by the glycemic index (GI). In humans, diets that provide a low GI are linked to a lower incidence of obesity, diabetes and heart disease, among other health benefits." 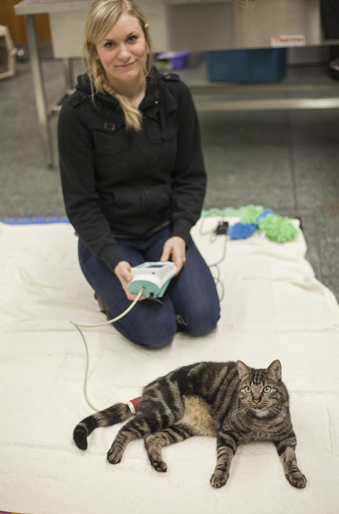 The wide-ranging study will compare the effect of four different starches (peas, faba beans, lentils and corn) in omnivores and carnivores across three different species – cats, dogs and two varieties of fish. Corn is included as a control starch.

One of the study's goals is to develop GI indexes for these starches in cats and dogs. That will help to determine which pulse starch can provide the highest digestibility and the lowest GI.

"Omnivores (dogs) and carnivores (cats) digest and use carbohydrates differently. Carnivores in nature eat a strict protein diet. The problem with pet food is that it's very high in carbohydrates, which carnivores have a hard time digesting. We're looking for the best mix of carbs and protein," says Zatti.

If researchers can provide pets with a more compatible diet, health effects from diseases such as diabetes, obesity and heart disease may be mitigated.

"This is especially true for carnivores such as cats," says Zatti. "Cats don't have as high an activity of the enzymes that break down carbohydrates, so they're more vulnerable to high blood sugars (and resulting insulin spikes) which contribute to Type II diabetes."

"We know it's true for humans," Briens adds. "When you compare pulses to rice and corn — two common pet food ingredients — pulses are definitely providing a lower glycemic index. But there's little actual research done on GI on cats."

The study will also include two fish species: Nile tilapia (omnivores) and rainbow trout (carnivores). The WCVM researchers hope to be able to make recommendations on the use of pulses in commercial fish food for aquaculture operations.

The study starts with the eight cats that have already arrived at the university. The research team will eventually repeat the study in a group of beagles. 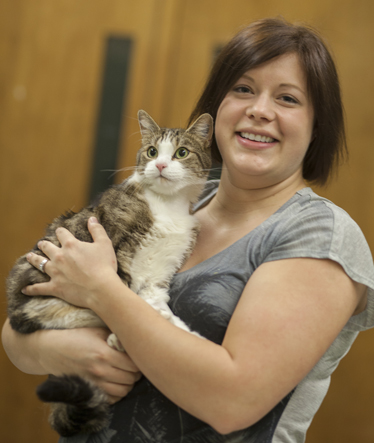 In the first part of the study, researchers will feed a whole-food diet containing one of the test starches for a total of eight weeks. They'll then test feces collected from the animals and fish to see how much undigested starch travels through the species' digestive tract.

"For the digestibility trial, we acclimate them for a week on the diet," explains Zatti. An indigestible "marker" is included in the feed at a ratio of 30 per cent starch to one per cent marker. Researchers will weigh and measure the ratio of starch to marker in the feces to determine how much of the starch was digested.

For this part of the study, the cats will only participate one or two days per week. Researchers will feed each cat a small amount of a specific starch and then perform a few simple tests such as a blood pressure test and a cardiac ultrasound examination. Researchers will also take a number of blood samples over several hours to determine a GI curve index for corn and for the pulses.

"The cats have to sit for these tests without any sedatives," says Zatti, "so we have to make sure the research room is a happy place with lots of treats and play time."

Zatti and Briens also take pains to ensure the cats are happy and well socialized. The animals are kept in group housing and are in constant contact with people and with each other. After the three-year study is complete, they'll be adopted out to homes in the community through a selective adoption process.

Any animals that are withdrawn from the study for handling reasons or health concerns are adopted out right away.

Collected data will help to flesh out other parts of this wide-ranging study. For example, blood samples will be studied for biomarkers of inflammation, oxidative damage and stress. Another graduate student, Marina Subramaniam, is also using the project's results to study a genetic component of nutrition.

With funding from the Natural Sciences and Engineering Research Council of Canada (NSERC), Saskatchewan Pulse Growers, Alliance Grain Trades and Horizon Pet Foods, this study is an ideal example of collaboration between U of S researchers and partners in industry.