They all have historical ties to a certain little fungal nuisance called ergot that has been around for centuries. The fungus Claviceps, spp. grows on grasses such as rye, wheat and related crops. It produces black bodies called ergot — or sclerotia — that contain a host of toxic alkaloids.

The effect of consuming these alkaloids is wide ranging, and in sufficient doses, it can affect the central nervous systems of animals and people.

It's these neurological effects that explain why certain ergot alkaloids are the central ingredient in the recreational party-drug, LSD. Historians even speculate that the "witches" of Salem in the 1600s were simply suffering from ergot-induced psychosis.

In the Middle Ages, ergot poisoning outbreaks from contaminated bread and grains were common. Victims suffered with gangrene characterized by poor circulation and tissue death in their extremities. These symptoms occur because ergot alkaloids can cause vasoconstriction — when blood vessels significantly narrow in diameter, reducing blood flow to the periphery.

Today, the risk of accidental human consumption of ergot-contaminated grain products is no longer a concern. But ergot is still a common problem for grain farmers — particularly in Saskatchewan where several years of warm, wet summers are creating the perfect environment for ergot to thrive in rye and barley.

According to Dr. Barry Blakley, a veterinary toxicologist at the Western College of Veterinary Medicine (WCVM), another contributing factor is ergot's spread to brome grass growing in ditches. The grass acts as a reservoir for the fungus that produces ergot, making it easier for the fungus to invade crops.

He adds that popular low-till and no-till practices also allow the fungus to remain on the top of the soil where it can't be metabolized by soil organisms.

The sclerotia grow in place of the grain kernel and are harvested along with the grain each year. After harvest, the sclerotia are screened out of the grain along with other impurities such as weed seeds. This process ensures the quality of grain for human consumption — but where do the ergot-contaminated screenings end up?

As a cost-savings measure, producers often add grain screenings to cattle rations. The Canadian Food Inspection Agency (CFIA) has placed a limit on how much ergot cattle can safely consume without causing issues such as gangrene.

However, as scientists conduct more studies, they're finding that ergot can cause underlying effects such as vasoconstriction. It can also affect animals' body temperature and alter levels of hormones such as prolactin — a hormone that plays a key role in milk production.

"The problem is the alkaloids in the sclerotia are highly variable . . . [but] we can now assess this in a much more systematic and vigorous way," says Blakley.

He and other researchers have access to advanced analytical techniques for measuring ergot concentration that are now available at Prairie Diagnostic Services (PDS) — the provincial veterinary laboratory for Saskatchewan. 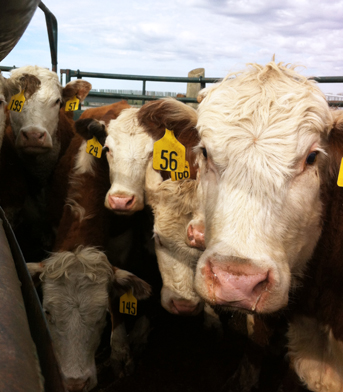 Previous research has shown that dairy cows have an increased susceptibility to ergot because they consume large quantities of feed. The cows will experience a drop or cessation of milk production when fed high enough quantities of the alkaloids.

"My recommendation is that if there is any ergot in the feed, you really shouldn't feed it to dairy cows," says Blakley.

But before scientists can understand what quantities of ergot cause health issues and what impact the fungus has on cattle health and producer economics, more research is needed to measure subtle changes caused by feeding very low doses of ergot to animals.

That's my job as a summer research student with WCVM professor Dr. Jaswant Singh. I'm conducting a feed trial on beef cows at the college's Goodale Research Farm. We feed ergot-contaminated grain to groups of cows at and below CFIA recommendations.

We want to build on this knowledge to determine if these doses can cause sub-clinical effects significant enough to result in a long-term economic loss for cow-calf producers in Saskatchewan.

I also perform daily ultrasound exams of the study's cows to monitor blood flow in several arteries. Our findings will hopefully give us some insight on how ergot can subtly alter blood flow without actually causing tissue damage. A decrease in peripheral blood flow could cause a decrease in milk yield that would have long-term effects on calf growth.

I also collect everything from blood to milk and feces from the cows. We will use the blood samples to track the effects of the ergot on prolactin levels. A drop in this hormone could also impact long-term milk yield.

If we're successful in documenting effects of ergot at these low concentrations, it may cause producers to feel differently about feeding weed screenings to their animals. It may also mean that federal regulators need to revisit the limits in place for ergot in cattle feed.

Updating these parameters could help to make beef cattle healthier and more productive — and lead to economic benefits down the road.

Alex Neumann of Regina Beach, Sask., is a second-year veterinary student who is part of the WCVM's Undergraduate Summer Research and Leadership program in 2014. Alex's story is part of a series of articles written by WCVM summer research students.