Tina's coat clip isn't just for looks — it's out of necessity. The senior horse grows an excessive coat that is a prominent sign of the disease she has been diagnosed with: equine Cushing's disease.

Abnormal hair growth, laminitis and a change to fat deposit patterns (including a "cresty" neck) are signs of Cushing's disease. It's the most prevalent endocrine dysfunction among horses and is often diagnosed in horses older than 18 years.

Deubner, who lives on an acreage south of Saskatoon, Sask., recognized the signs of Cushing's disease in her mare almost three years ago. She was particularly concerned about Tina's bout of laminitis: "That's when it [PPID] gets serious."

Since then, Deubner has managed Tina's condition with daily doses of pergolide — the only drug treatment available for the disease. Pergolide imitates dopamine, acting as its replacement and decreasing the clinical signs of disease. 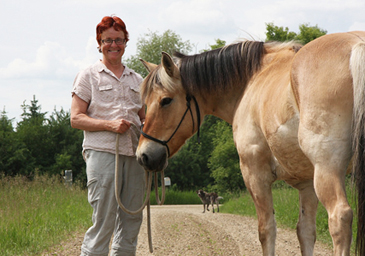 Despite the daily administration and price tag associated with pergolide, Deubner endorses the treatment. "If it keeps my horse useful, then it is worth the cost."

In fact, since her diagnosis, Tina has extended her riding career and is used as a school horse at a local stable.

More horses are living longer lives — thanks to appropriate preventive medicine and  regular health management by their owners who care for their retired horses as pets. This has contributed to the prominence of PPID cases among the world's equine population.

"[It's] a chronic, incurable disease of the aging horse that is relatively common," says Dr. James Carmalt, a large animal surgeon and researcher at the Western College of Veterinary Medicine (WCVM).

Carmalt is proposing a drastic shift in veterinarians' approach to treating equine PPID. The end goal of his research is to develop a surgical cure for the disease that will improve on the current standard of treatment.

As Carmalt points out, when humans or dogs suffer from pituitary-dependent Cushing's disease, the gold standard for care is surgery.

"Why not [surgery for] the horse?"

Surgical destruction of equine pituitary tumours could provide a long-term cure for PPID and eliminate the need for daily drug therapy.

Before performing a surgical approach, Carmalt's focus is on examining biomarkers of PPID — measurable indicators of the severity or presence of the disease. Association of a reliable chemical pattern with PPID may permit veterinarians to conduct more accurate and predictive testing for the disease. Particularly, the aim is to identify horses that are developing PPID but show no distinctive disease signs.

Carmalt reinforces that the PPID diagnosis and treatment are difficult for the veterinarian and the horse owner.

"The common veterinary problem of questioning the diagnostic tests, agonizing over whether to treat and then finally having someone treat the horse every day for the rest of its life has to become something of the past."

Another part of the research team's plan is to sequence genes of interest. This process could detect differences in hormone modification that exist between normal and PPID-affected horses.

Carmalt's collaborator for this particular project is Dr. Suraj Unniappan of the Laboratory of Integrative Neuroendocrinology at the WCVM. The project has received financial assistance from the veterinary college's Equine Health Research Fund.

Early detection of PPID and a long-term cure for the disease may ultimately sustain a horse's career and allow horses to enjoy a longer, useful life, says Carmalt who acknowledges that his goals are ambitious.

"The status quo will remain as such unless someone somewhere makes a radical, paradigm shift in the thinking process surrounding this disease."

Back at Deubner's acreage, she continues to treat Tina for Cushing's disease. She used to give the compounded pergolide to Tina with a carrot or in her beet pulp, but her horse soon caught on and stopped eating any feed or treats containing the medication.

As an alternative, Deubner recently began using a tablet form of pergolide mesylate (Prascend®) to treat her horse.

"We dissolve the pill in water and squirt it into her mouth — that application seems to work the best," says Deubner, who thinks her horse's general well being has improved with the change in treatment.

"Her coat looks better, and she has a generally ‘younger' look … [It's] something that I notice as a forever owner of this horse."

For Deubner, the enduring company of her affectionate fjord mare makes the management of PPID worthwhile.