Dr. Sarah Boston, a graduate of the Western College of Veterinary Medicine (WCVM), is returning to her former hometown of Saskatoon and her alma mater to talk about her new book — Lucky Dog: How Being a Veterinarian Saved My Life.

Saskatoon's McNally Robinson Bookstore is hosting Boston's public book reading and signing at 7 p.m. on Thursday, June 26. Boston will also give a talk at the WCVM in Room 2302 at 1:30 p.m. on Friday, June 27.

Written from the unique perspective of a veterinarian who specializes in surgical oncology, Boston's memoir chronicles her frustrations with the human medical system as she seeks a diagnosis and treatment for thyroid cancer.

"Everyone who enjoys the book takes something different from it," says Boston, who is gratified by the number of people who have reached out to her since reading the book.

"The cancer survivors and especially the thyroid cancer survivors have been through the exact same thing, so there's a real connection with that group of people. Many of the veterinarians think it's a good voice for our profession, and the animal lovers just love the stories."

Boston's quick wit shines through her writing as she describes the challenges of navigating the Canadian health system while she also relates humorous and heartwarming stories about herself, her patients and their owners.

A confirmed animal lover herself, Boston is an associate professor of surgical oncology at the University of Florida's Department of Small Animal Clinical Sciences. For as long as she can remember, animals have been a part of her life — along with the goal of becoming a veterinarian.

In 1996, she realized that goal and graduated from the WCVM — a place that still holds special memories for her. 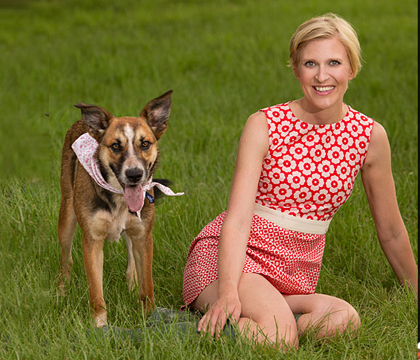 "I'm looking forward to seeing some of the people there, people like Drs. Cindy Shmon, Sue Taylor and Trish Dowling," says Boston. "They were fantastic teachers and lecturers. Working with them inspired me to teach and to specialize in surgery."

Following graduation, Boston interned at the University of Guelph's Ontario Veterinary College (OVC) for a year. After three years working in a general practice, she returned to the OVC for a surgical residency and then completed a surgical oncology fellowship at Colorado State University.

In 2007,  academic life led Boston back to the OVC where she became an assistant professor in its Department of Small Animal Medicine.

"I like the lifestyle of an academic," Boston explains. "I like that some weeks I'm working on the floor doing surgery, another week I'm at a conference speaking and another week I'm doing research. And I love teaching the students – just watching them get turned on to the subject is really gratifying for me."

Boston was enjoying her work at the OVC when she discovered the mass on her thyroid gland and began her journey through the Canadian health care system.

While Boston didn't set out to write a book, she began writing about her experiences because she was frustrated and because she wanted to let her friends and family know what was going on. Many of her notes were typed on her cell phone while she was waiting for an appointment or dealing with bouts of insomnia.

"That's exactly what was happening to me in that exact moment, and so the desperation and sometimes mania were exactly how I was feeling at that time," says Boston. "I hope that seeing how someone else was feeling in the exact moment can help people who are going through their own struggles with cancer or another disease process."

Boston hopes the book will encourage people to become health advocates – whether it's for their dog or a family member or themselves. She also urges people with health issues to reach out to someone with a medical background who can help them understand and find good information.

In the book, Boston compares her experiences to those of the animals that she's treated during her career. She was struck not only by the difference in wait times for diagnosis and treatment of cancer, but also by the differences in client consultation.

"Veterinarians probably spend too much time trying to explain everything and provide support for the client. And then on the complete other end of the spectrum, doctors were spending 10 minutes with me to explain that I might have cancer."

Boston also strives to shed some light on her own profession – what it's like to treat animals and work with their owners who are often very devoted to them.

She hopes that her personal anecdotes will encourage people that a cancer diagnosis isn't necessarily a death sentence for their pets. That's also an important message for humans who are diagnosed with cancer.

"I think that we cancer survivors have to stand up and say that not every cancer is a death sentence. There is hope. Some of these cancers are treatable and curable, and you need to get on top of it and advocate for yourself and go through your treatment, and a lot of us are going to be just fine."

Boston points out that it's not a bad thing to think about dying because it can make you re-evaluate your life. That re-evaluation is what prompted her move to Florida.

"Going through that experience and wondering how long I was going to live made me realize that you've got to enjoy your time, you've got to live in the moment," says Boston, who says she has good reasons for using "lucky dog" as her book's title.

Dr. Keri goes back to school