"She brought his food over to him, and he still wouldn't eat," says Kylie's mom, Stacey Couture. "Uh oh, we thought."

Kylie, a C-level Pony Club rider, noticed bloody diarrhea on Clifford's tail — a sure sign something was very wrong. She ran to get her thermometer and stethoscope to take Clifford's vital signs, but by the time she returned, Clifford was lying down in the snow.

With the winter weather in a severe cold snap, the Coutures got the gelding up and brought him into their heated garage. They also started making phone calls.

"We talked to our vet in Prince Albert," explains Stacey. "They suspected colitis but said they were not set up to treat that [illness], so they said it was best to send him to the university."

A physical exam confirmed that Clifford was very sick. He was depressed and dehydrated with profuse, bloody diarrhea — all secondary symptoms to colitis (inflammation of the colon).

As Higgins explains, the equine gut is a fragile, complex system, and disturbances can critically alter the normal digestive and absorption functions. These changes can be mild or life threatening depending on the severity of the imbalance.

With serious colitis, severe diarrhea can result in a large amount of fluid loss that can lead to a drop in the animal's blood pressure and circulatory shock if left untreated.

"The most concerning finding in Clifford's case was abnormal, free fluid detected by ultrasounding his abdomen — a clear indication of a severe inflammatory process in the abdominal cavity. In addition the colon wall, which is normally only a few millimetres thick, measured approximately two centimetres in places," says Higgins. 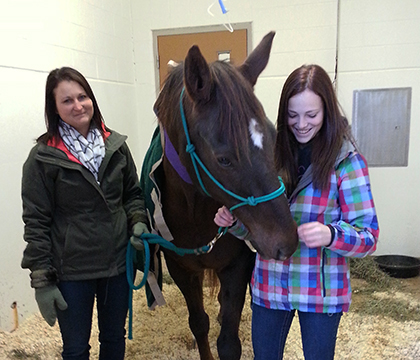 Once the colon's normal functions are compromised by colitis, the integrity of the gut wall also becomes affected. If the inflammation is severe enough, bacteria can then cross into the abdomen (causing a condition called septic peritonitis).

"Right away, they performed an ultrasound exam and had him hooked up to an IV — everything was quick, quick, quick," says Stacey. "They iced his feet right away too because of concerns about secondary laminitis."

"In Clifford's case we never found the underlying cause of the colitis. Unfortunately, this is common [with colitis cases]," says Higgins. All of the results — including fecal egg counts, bacterial cultures and molecular diagnostic tests — were negative.

Since all tests were negative for infectious pathogens, WCVM clinicians didn't use any antibiotic drugs as part of Clifford's treatment. As Higgins explains, antimicrobial drugs can cause abnormal shifts in horses' sensitive gut microflora. With colitis cases, certain antibiotics can actually cause more harm by further disrupting the "good" bacteria and aggravating the imbalances in the hind gut.

As a result, Higgins says veterinarians carefully select whether a horse should receive antibiotic drugs based on the underlying cause of the colitis and secondary complications. 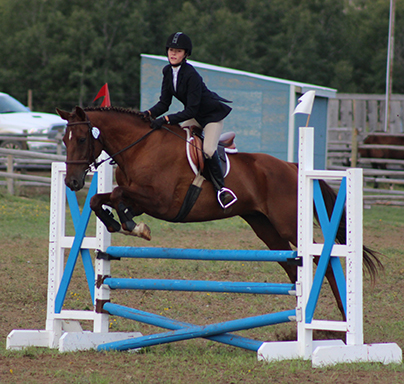 "Clifford was an entertaining horse," says Higgins with a smile. "When our patients come here, they're sick. And when they go home, they're more like themselves. At the beginning, Clifford was so depressed. But at the end, he followed you around the stall like a puppy."

As for the Coutures, they're grateful for the WCVM clinical team's care as well as the regular reports about their horse's health.

"We were very upset when we brought Clifford in, and they were very patient with us," says Stacey. "We had an update every day. Every morning they'd phone and let us know what his levels were and how he was doing. They phoned after we brought Clifford home, and checked on some follow-up blood work. It was a very good experience."

"Some [more serious] cases need hospital support — that's where the WCVM can help. It's a complement to the local veterinarian's work. And we make sure to keep referral vets updated on their patient's progress, so they can follow up on the case and continue their regular treatment and checkups when the horses go back home."

"The day after we got Clifford home, we let him out for a couple hours. He was so happy, kicking at the snow and running around," says Stacey. "You could tell he was feeling better; after a few days he didn't want to be in the barn!"