With help from her friend Jessica Thompson, Roberts – then a receptionist at Winnipeg's Machray Animal Hospital — began recruiting volunteers to help deal with the out-of-control stray cat population in their neighbourhood.

"There were a few clients that had feral cat populations and they would constantly bring in new kittens," says Roberts, now a fourth-year student at the Western College of Veterinary Medicine (WCVM). "It was a never-ending circle."

Cat Advocacy Rescue and Education (CARE) was created in October 2011, and with help from volunteers, they spayed and neutered cats on Sundays when the veterinary clinic was closed.

While this number represents only a small percentage of Winnipeg's feral and stray cat population (estimated at between 100,000 and 200,000 animals), Roberts, Thompson and their team of volunteers are making progress in combating a persistent problem in a high poverty neighbourhood.

After Roberts began veterinary school in 2012, Thompson stayed in Winnipeg and managed the program while she continued working at Machray Animal Hospital.

Roberts returned to Winnipeg to help with their program during the summer months, and by the second year, CARE volunteers had spayed or neutered 360 cats from feral cat colonies. The program has now shifted its focus to include low-income clients who have rescued animals off the street but can't afford veterinary care.

Many clients will cover the basic costs or pay as much as they can. If an owner has rescued an animal but can't afford veterinary treatment, CARE will cover the cost.

"It means the cat stays in a home instead of going to a shelter or humane society," says Roberts. "Everyone is just so thankful, which is why we've kept on going."

Word of the program spread quickly through CARE's Facebook page, which also helped garner enough donations to keep the program operating. All of the veterinarians and veterinary technologists donate their time while Machray Animal Hospital gives CARE a deal on clinical space. 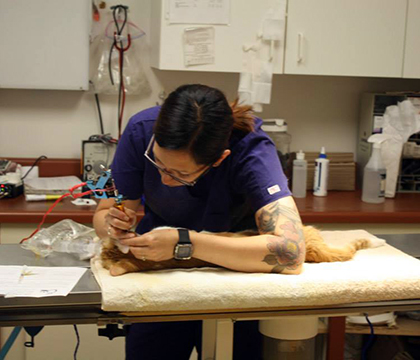 This summer Roberts again returned to Winnipeg, and for the first time, she recruited help from her classmates and from veterinary professionals at other clinics in the city.

"Our volunteers continue to come back and help us and really enjoy their time volunteering," says Roberts, noting that almost all of CARE's volunteer veterinarians are WCVM alumni.

CARE recently held its largest clinic ever: 17 volunteers neutered 49 cats in one day.

"We try to maintain high quality care while still doing high volumes," says Roberts. All the cats that are spayed or neutered are vaccinated against feline viral rhinotracheitis, calicivirus and panleukopenia. The animals also receive a dose of Revolution® (selamectin) for flea control and heartworm protection.

Roberts is set to graduate from WCVM in June 2016. She hopes to return to Winnipeg and work as a small animal veterinarian while continuing her work with CARE. One day, she hopes to see the program expand into a full-time, low-cost spay and neuter clinic in the city's north end where it's desperately needed.

While the Winnipeg Humane Society offers a low-cost spay-neuter program, Roberts says north Winnipeg clients without a vehicle must take three different buses to reach the clinic — a challenging trip with a cat in tow.

As a cat lover, Roberts has also benefited from CARE. She has two cats of her own — and both pets found their way to Roberts' home through the program that she helped to create.

Visit the CARE Facebook site or email admin@carecatswinnipeg.ca to make a donation or to find out more about volunteering opportunities with the program. To contact Randi Roberts, email rmr255@mail.usask.ca.

Bruce’s happy before and after

Can your pet get sunburned?