"It was amazing! He was wagging his tail, walking around the room sniffing stuff and coming up to people to say hi," recalls Hilberry, a clinical associate in dentistry at the Western College of Veterinary Medicine's Veterinary Medical Centre (VMC).

"The pain he'd had before was gone, and his true personality came out."

The transformation was also obvious to Cynthia Dyck and her husband Jim Arthur. The Saskatoon couple had begun by fostering Ben, but they soon decided to adopt the four-year-old collie who had lost his sight about two years before coming to Saskatoon's New Hope Dog Rescue.

Although Ben had started out as a working dog who had been trained to herd sheep on a ranch in British Columbia, his progressive vision loss had ended his career. The ranch owners had eventually kenneled Ben to prevent him from getting into trouble by bumping into the other dogs and eating their food.

When Ben first came to Dyck's home, she assumed that his low energy and shyness were the result of his new environment. But a routine veterinary examination revealed that he had some serious dental problems that were causing a low-grade infection, and Ben was referred to the VMC's dentistry clinical service.

"Ben had severe wearing of his canine teeth that had caused their sensitive inner structures to be exposed," Hilberry explains. "It was very painful for him, so we recommended that he have three of them removed."

After his dental surgery, Ben was sent home with a course of antibiotics to combat the infection. Within three days, his transformation began. He lifted his head above his shoulders for the first time since he'd joined Dyck's household, and he became more responsive and alert. He also began opening his mouth to pant or to lick — behaviours that his owners suddenly realized they'd never seen before.

Dyck and Arthur became attached to Ben very quickly as they helped him to navigate walks through their neighbourhood. Several weeks later, they took him to the local off-leash park.

"That was the environment for him," says Dyck. "And I thought, ‘Well, of course. You were raised in fields. Those sounds you know and that feeling you know.' He stayed close and didn't go tearing off in all directions, and that was the first time we saw him physically relax."

As part of Dyck's family, Ben has also had to learn how to interact with Masha, their 14-year-old German shepherd cross dog. Although she's grown accustomed to Ben running into her, Masha is still protective of her food, so Dyck ensures that their food dishes are kept in separate places.

Now that Ben has become acclimatized to his new life, Dyck is even more aware of the pain he must have experienced before his surgery.

"I think it's one of those testaments of how dogs can't complain, and so they just don't. I think he just learned to cope with the pain, and the big difference I see is in his quality of life." 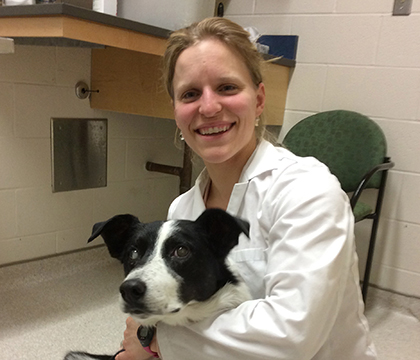 Hilberry confirms that dental problems can make a huge difference in both the quality and the length of a pet's life. Dental disease is associated with other conditions such as kidney disease, heart disease and liver disease – all disorders that can be fatal.

Smaller dogs are more prone to dental disease because their teeth are too large for their mouths. There are also specific breeds such as Yorkshire terriers and Chihuahuas that need a lot of brushing and diligent care by their owners.

Hilberry points out that it's never too late to start brushing your pet's teeth, and she recommends that you have a veterinarian clean their teeth first in case they already have loose or painful teeth.

During a routine dental cleaning, your pet will be placed under anesthesia so that a special device can be used to clean the plaque and tartar that are below the gum line. This debris is the most common cause of unhealthy teeth.

"Think about your own dental care," says Hilberry. "We brush our teeth twice a day, but when we go to the dentist once or twice a year, think about how long it takes for them to clean your teeth with the minimal amount of plaque that you have. Most of the dogs and cats that we see have way more."

Once the teeth have been cleaned, brushing can gradually be introduced into your pet's daily routine. Although human toothbrushes with soft or ultra-soft bristles are adequate, Hilberry emphasizes that human toothpaste is poisonous to animals. See your veterinarian about purchasing animal toothpastes that come in flavours such as chicken and fish, and ask your clinician to walk you through the process of brushing if you're unsure about how to begin.

Dyck is grateful to Hilberry for her care of Ben. She also appreciates the support of New Hope Dog Rescue that paid for all of Ben's dental surgery as part of the registered charity's mission to ensure that its canine wards are healthy for adoption.

Dyck emphasizes that New Hope Dog Rescue counts on donations to pay for medical expenses such as Ben's, and she hopes that people will consider donating to this worthy group.

Now that the pain is gone and Ben's true personality is emerging, Dyck and her husband have become increasingly attached to him as they marvel at his tremendous spirit, in spite of his limitations.

"The blindness keeps him from being aggressive, but he's very bold in his movements, and when he makes a decision, he goes with it. He's quite lovely to have around because he's not cowering or being really fearful. And when we look at him, we think, ‘Wow! You're fearless! You're absolutely fearless!"

Lynne Gunville is a freelance writer and editor whose career includes 25 years of teaching English and communications to adults. She and her husband live at Candle Lake, Sask.