"When a horse is infected [with equine infectious anemia or EIA], it is infected for life," says Dr. Sara Higgins. She's a resident in large animal medicine at the Western College of Veterinary Medicine (WCVM) whose master's degree research focuses on EIA. Also known as swamp fever, EIA is a federally reportable disease in Canada.

In the past few years, the number of detected EIA cases has risen — especially in parts of Western Canada. Since there's no available vaccine or cure for EIA, animals that test positive are quarantined for life or euthanized to break the transmission cycle and to protect susceptible horses.

The EIA virus is spread by the transfer of blood between animals. In nature, large biting flies mediate this transmission by transferring blood from one horse to another through successive bites.

Horse flies are the main natural vector for mechanically transmitting the virus, but Higgins points out that people can also have an important influence on spreading the disease. Contaminated blood transfusion products, needles, surgical instruments and other equipment are all potential sources for infections. Humans can then transport these contaminated items for much greater distances and in far greater volumes than any insect vector.

"Blood is handled in a more unregulated manner within the animal world compared to the human world where there are very stringent rules," says Higgins. "We need to start treating horse blood in the exact same way. If we keep this in mind, maybe we can help to reduce EIA and limit the numbers of horse affected by it."

Once transmission occurs, the EIA virus is very resilient to the horse's immune system, and it employs several mechanisms to avoid being eliminated. One key factor is that the EIA virus keeps mutating in the body. It continuously changes its surface proteins, preventing the immune cells from effectively binding to the virus. This is one of the actions that limits the ability of the horse's immune system to effectively clear the virus from the body. 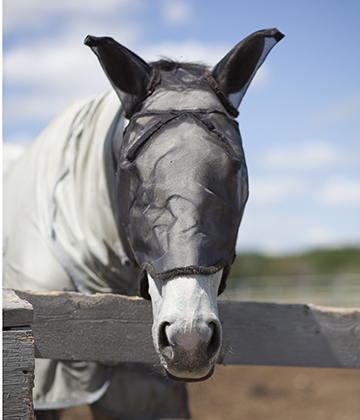 While some EIA-infected horses will become sick, most animals are asymptomatic for their entire lifetime. Since these healthy-looking animals are unlikely to be removed from horse herds, they represent a potential source for viral spread, says Higgins.

If a horse does show clinical signs of disease, these signs are often non-specific, which makes the clinical diagnosis challenging. In cases of acute infection, a horse may develop a mild fever or go off its feed; these signs often go unnoticed by the owner.

"[Horses] can alternatively display chronic signs of disease," says Higgins. "These horses lose weight, have no appetite and can become anemic with low platelets (blood-clotting cells). This is when your veterinarian may suspect the disease and want to test for EIA."

She adds that the lack of specific symptoms associated with EIA makes blood screening a critical component in identifying the disease. Originally, veterinarians used a Coggins test as an initial method to identify infected horses. Since its development in 1970s, this test helped to significantly reduce the number of EIA-positive horses in the tested population.

A more sensitive ELISA (enzyme-linked immunosorbent assay) is currently used as the initial screening test for EIA. All samples that screen positive are then tested using a "confirmatory protocol" that includes an agar gel immunodiffusion test (Coggins test). A horse is considered infected with the EIA virus if there are positive results from confirmatory testing.

"The virus itself can be difficult to detect in some EIA-positive patients because the virus quantity in the blood may be very small," says Higgins. "What we currently do is to test for antibodies: proteins that demonstrate the animal was exposed to the virus."

While screening is the most effective way to protect the horse population from the spread of EIA, Higgins says owners can also help to reduce the risk by following safe health management practices.

In particular, people need to avoid reusing blood-contaminated instruments. Even small quantities of blood on these tools are enough to harbour virus particles and increase the risk of transmission.

While it's more difficult to control flies, Higgins recommends keeping horses away from wooded areas and using appropriate insect repellents.

A vaccine would be the ideal defence against EIA, but since that's not available, proper health management practices and public awareness are the next best tools to combat the disease.

"By educating people and [being aware of] how we manage horses, we can potentially limit the spread of this disease," says Higgins.

Brenden Van Wyk is a Master of Science (MSc) student at the Vaccine and Infectious Disease Organization (VIDO).