With the new equipment, the centre's radiation oncology team can offer its patients a new system called stereotactic radiation therapy (SRT) that requires only three visits.

"That's really advantageous to the patient because they have fewer side effects, and the out-of-town patients don't have to stay here for three weeks to a month," explains Rachel Bloomfield, radiation therapy technologist at the Veterinary Medical Centre (VMC).

"It's especially important that the side effects are minimal and we can avoid the normal tissue of structures like the liver or the kidneys."

The linear accelerator, which is commonly used for delivering radiation therapy to people, has its own imaging systems that allow for greater accuracy. It's also capable of more advanced treatment techniques such as intensity modulated radiation therapy (IMRT).

As Bloomfield explains, IMRT treatments rely on multi-leaf collimators that shape the radiation field so that it conforms to the shape of the tumours while sparing as much normal tissue as possible. As these devices move during treatment, they cause fluctuations in the radiation beam that alter the intensity of the dose and make it possible to avoid damage to the patient's critical organs. Because more normal tissue is spared, a higher dose can be delivered to the tumour using SRT. 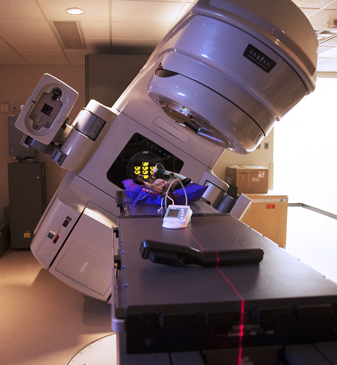 When the radiation therapy team combines the two therapies, Bloomfield says they can deliver radiation in a precise dose directly to the tumour. And since patients receive a higher dose of radiation per treatment, they don't need as many visits to reduce the tumour's size.

SRT is effective for treating many types of tumours in human patients, particularly deep-seated brain tumours and other solid tumours. It has also been shown to be as effective as conventional radiation therapy for some tumour types in animals — such as nasal tumours, brain tumours and bone tumours — with a much lower risk of radiation side effects.

However, Bloomfield points out that it can't be used to treat the microscopic disease left after a tumour has been surgically removed since its high radiation dosage would cause too much damage to the normal tissue.

Because the linear accelerator produces such high doses of radiation, immobilizing each patient is crucial during therapy, particularly for SRT. Before a pet's initial treatment, Bloomfield constructs a customized immobilization device that includes a board, formable cushions and moulded thermoplastic shells which are placed around the animal to position it and to ensure that it doesn't move during treatment.

While the animal is in the immobilization device and positioned exactly as required for treatment, medical imaging specialists perform a CT scan. These CT images are then entered into a specialized computer program which designs an individualized treatment plan. 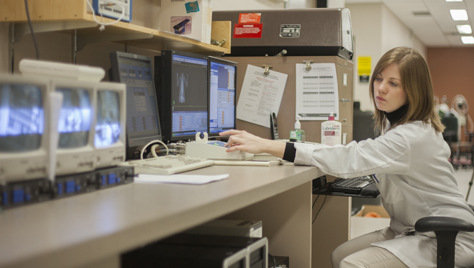 "The planning for stereotactic radiation therapy is much more elaborate and complex than conventional plans and may take time to perform," says Bloomfield. "Quality assurance checks are a must with SRT and are carried out at the start of each treatment to ensure the patient is receiving the correct calculated dose."

These quality assurance checks include double checking calculations and using monitoring devices to measure radiation dosages for each field of treatment.

Bloomfield also uses the linear accelerator's own imaging system to ensure that the patient is positioned properly before the treatment can begin.

"We use that imaging before every treatment to make sure that the patient is in the exact same spot as what we planned for. It's just another way that we can be more accurate when delivering the treatment. We can now deliver treatments within a millimetre or less."

Having access to such advanced technology is exciting for Bloomfield who's gratified that she has the opportunity to help increase the chance of survival and the level of comfort for her patients.

"It's great to have a machine that has the capability of delivering the dose that we want to the tumour. We can shape exactly as we want, avoid as much tissue as we want and deliver as high a dose as possible."