Her parents, Leanne and Keith of Pilot Butte, Sask., had bought the 2004 gelding a year earlier, and Jack and Morgan were starting to make a great team with help from their coach Sandy Assman.

But on June 10, Assman called with news no owner wants to hear – Jack wasn't bearing any weight on his left front leg.

"We were scared it was broken," says Morgan.

Dr. Tanya Marshall of TM'z Veterinary Clinic in Lumsden, Sask., was called out for X-rays, but the exam showed no sign of a bone chip or fracture. An ultrasound was scheduled, but the results showed no sign of tendon or ligament damage.

However, when shaving Jack's leg for the ultrasound exam, Marshall found a small puncture wound at the bottom of his left front fetlock. Suspecting possible tenosynovitis, or tendon sheath infection, Marshall took a fluid sample from the left fetlock joint and sent it to the Western College of Veterinary Medicine (WCVM) Veterinary Medical Centre.

"On Wednesday morning, June 19, we got the call to get Jack in to the WCVM as fast as we could," says Leanne. The family transported Jack to Saskatoon that day. "He was in surgery within half an hour [of arriving]." 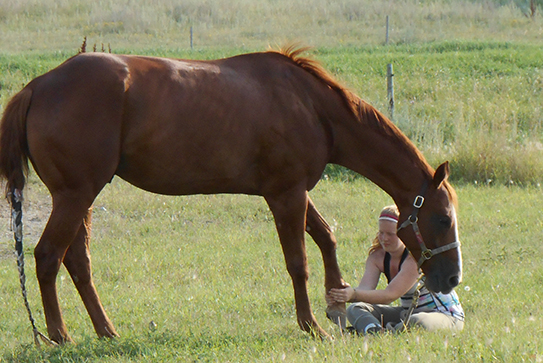 Fluid samples were taken from Jack's left fetlock joint and tendon sheath. "The fetlock looked normal," says Sanchez, "but the tendon sheath samples were cloudy and the lab [Prairie Diagnostic Services] determined it was septic. They were able to grow a bacteria from it."

Treatment for tenosynovitis is two-fold: antibiotics, and lavage, which includes both flushing and scraping of the tendon sheath when done arthroscopically. During this procedure, a veterinary specialist inserts an arthroscope (equipped with a tiny camera) inside the sheath. A tube is attached to the scope so fluid can be pushed out.

Although Jack's initial prognosis was only a 20 per cent chance of recovering enough to be sound at a trot, the Ashdowns decided to go ahead with therapy.

"In surgery, we used an arthroscope to enter the tendon sheath, which was very inflamed and had a lot of fibrin and fibrous adhesions in it," explains Carmalt. "The fibrin act as a nidus [source] for bacteria to reside in and can stick tendons together within the sheath. If you don't get rid of it, it can become a permanent adhesion." The surgeons used a special tool called a mechanical synovial resector to remove as much of the inflamed tissue as possible.

Shortly after Jack's first arthroscopic surgery, the Ashdowns gave Carmalt and Sanchez consent to repeat the process as he was not improving as fast and as significantly as they would have wished. Additional fibrin and fibrous material within the inflamed tendon sheath was removed with the clinical team flushing over 20 litres of fluid through the tendon sheath in each of Jack's surgeries.

"Quite often with these chronic inflamed tendon sheaths, the first surgery is just to get bacteria count down, and to flush out debris" explains Carmalt. "Visually, when you first enter the sheath, it's like climbing into a spider's web — there are strands of fibrin everywhere …."

"This case was quite challenging as it had a lot of fibrin inside the sheath. It was very difficult to take it out and clean it up," adds Sanchez.

After surgery, clinicians used regional perfusion to inject antibiotic drugs directly into a blood vessel near the site of Jack's injury as well as into the tendon sheath itself. This procedure allows for a higher concentration of antibiotics within the affected tissues.

After a 13-day stay at the WCVM's Large Animal Clinic, Jack came home in early July 2013. He was tentatively on the road to recovery, but Morgan's job was just beginning. Regular movement was important to prevent adhesions from forming in Jack's tendon. 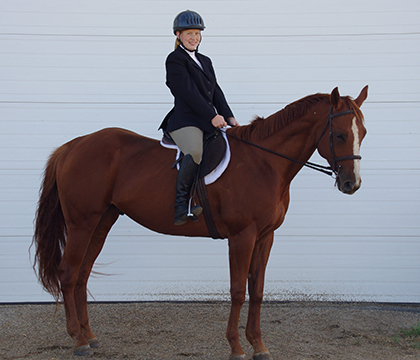 Armed with detailed discharge notes, "we started with six 15-minute hand walks per day," says Morgan. "I was out there all day, every day [during the summer]. After a month, Dr. Marshall [at TM'z Veterinary Clinic] recommended some weight on his back, so we switched from hand walking to riding at a walk. After another month we could trot some straight lines."

When Morgan had to return to school, Assman assisted with Jack's care and schedule until Morgan could come out to the barn in the afternoon. By Christmas 2013, Morgan was able to ride Jack normally again, making allowances for his left shoulder muscles that had lost strength during his recovery time.

Nearly 10 months later in September 2014, the pair was back to jumping. They're planning to spend this summer attending local open and quarter horse shows.

"We've been keeping the WCVM updated on Jack's recovery," says Leanne. "Dr. Sanchez was really super, he really treated us well. They go out of their way to recognize that this isn't just an animal — they're part of your family and they matter."

In February 2014, Morgan's dedication and perseverance in caring for Jack earned her the Equine Welfare Young Steward of the Future Award through the Saskatchewan Horse Federation and Farm and Food Care Saskatchewan (formerly Farm Animal Council of Saskatchewan).

"This case was a great example of owners going the extra mile to ensure their animal gets the best chance at recovery," says Carmalt. He adds that for these types of challenging injuries, the combination of proper treatment and proper aftercare is critical to a successful recovery.

"If the owners had decided against the second surgery or not been as diligent as they were about his recovery schedule, Jack's case may easily have had a much worse outcome."

Christina Weese, BDes, is a freelance writer, graphic designer, photographer and avid equestrian who makes her home in Saskatoon, Sask. Since 2008 she has also been the co-editor for the Canadian Arabian Horse News.