Dr. Stephen Manning is a board-certified theriogenologist and an associate professor at the Western College of Veterinary Medicine (WCVM). Based on his training and experience, Manning has some helpful information and guidelines on breeding, pregnancy requirements, normal foaling and foaling complications that can happen before, during or after birth.

The first step is getting the mare pregnant which can be a challenging task. It's not always clear when to breed your mare or easy to confirm pregnancy — especially without access to technology and equipment.

Manning explains that the classical way to determine pregnancy, commonly used by breeders and owners, is to observe a non-return to estrus (heat). Between 14 and 21 days after breeding, the owner re-introduces his mares to a stallion. If a mare will not stand for the stallion, her lack of co-operation may indicate that she's already pregnant.

A more definitive method involves trans-rectal palpation. In pregnant mares, the cervix will be long and tight. Depending on the stage of pregnancy you may feel a bulge, or later on, you may actually palpate the fetus in the uterus. Manning notes that this procedure takes some skill, and it's not necessarily easy to confirm pregnancy since changes can be subtle — especially early on when most mare owners are requesting a diagnosis.

Not all horse breeders may have access to a veterinarian who is skilled in this technology, although ultrasonography is commonly used by practitioners who do any amount of equine work. Ultrasound examinations can also be used at various stages to assess pregnancy:

Once the pregnancy has been confirmed, keeping your mare in optimal physical condition is important. For the first eight months, mares on good quality feed do not need additional feed requirements. However, since 65 to 70 per cent of fetal growth occurs from eight to 11 months, pregnant mares will require more energy in the last three months of gestation.

Manning says owners "don't need to double the energy provided in the feed, they just need to increase it by about 20 to 30 per cent. Sometimes this just means an increase in quality by adding in a concentrate and mineral."

While late gestational complications can be devastating, they are not the norm. However, breeders should be prepared to call a veterinarian if problems arise at any point in the pregnancy since many issues can be life threatening to the foal and mare. Here are several of the most dangerous, late gestational problems:


While some in utero complications can't be prevented or predicted, there are many things that can be done in advance to give foals and mares the best possible outcome.

In preparation, Manning recommends that breeders think about completing the following steps about 30 days before the anticipated date of foaling: 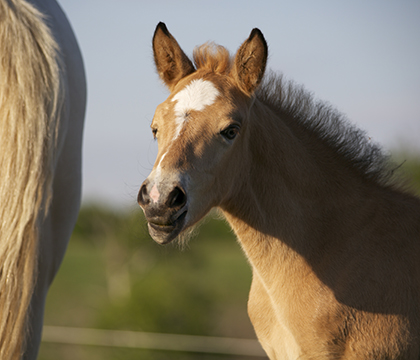 Predicting parturition (birthing or foaling) is a fine science and pregnancies will vary. While no single sign will fully determine the onset of foaling, Manning says that owners will notice a saggy or swollen vulva, udder development, wax production or vaginal secretions, and/or restless behaviour. If owners notice any, some or all of these signs, they should suspect foaling within hours to days and keep a watchful eye on their mare.

Most mares will foal at night and this isn't by coincidence. Mares, to some degree, are able to control the timing of early parturition stages if they are uncomfortable being watched. With this in mind, Manning advises breeders to "be discreet when watching your mare" and recognize that each of the three parturition stages "is a fine balance of knowing when to act and when to watch."

As a guideline, Manning likes to use the "1-2-3 rule" of foaling: "Your foal should stand within one hour, it should suckle within two hours, and your mare's fetal membranes should be discharged within three hours."

If any of the stages are notably delayed, Manning recommends that owners contact their veterinarian. Difficult births (dystocia) are not common, but they do require fast physical intervention by trained personnel to save the lives of both the foal and mare.

Foals normally come out of the birth canal with their front feet first, followed by their nose and the rest of their body. The most commonly seen dystocia would be a malpresentation of the foal – meaning that its body is somehow positioned incorrectly in the uterus or in the birth canal. Any malpresentation that delays Stage 2 and/or compresses the foal's umbilical cord is extremely dangerous since it will cut off the foal's only supply of oxygen and blood. If it isn't corrected quickly, a malpresentation can be fatal for a foal.

Even after you have a live, healthy foal on the ground, you might not be out of the woods just yet. Mares are susceptible to a number of post-partum complications that are serious and need to be swiftly resolved. These complications predominantly occur in mares experiencing dystocia.


Manning has a few points of additional advice for breeders:


It may seem like an overwhelming number of things could go wrong during the breeding and foaling process – but don't be discouraged.

"More than 90 per cent of pregnancies and foalings are normal," says Manning, adding that it's just good to be informed and prepared.

"If you're prepared for everything, it's Murphy's Law that nothing bad will happen."

Sarah Figley of Saskatoon, Sask., is a third-year veterinary student at the Western College of Veterinary Medicine (WCVM). Reprinted with permission from Canadian Horse Journal (horsejournals.com).