Our Place is also home base for "Vets for Pets," a free veterinary clinic that Vermuelen helps to operate for low-income and homeless pet owners in the city.

"I said we would have to see his cats before we could prescribe that [particular product]," Vermeulen recalls. When the man told her that the pets were in his car, she followed him.

"It turned out he actually lived in his car, with his two cats," says Vermeulen, who gave the man flea and deworming medication after examining his pets.

She often wondered about the man — where he lived and how he was doing. His concern for his pets' health is typical of the people who use the services at Vets for Pets, says Vermeulen. Despite their financial circumstances, homeless and low-income people value their animals — just like most pet owners. Sometimes their pets have been the only constant in their lives, and in many cases, their only form of non-judgmental companionship. 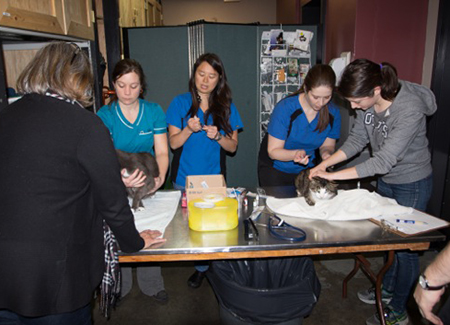 "It gives them a lot of pride to know their [pets are] being looked after," says Vermeulen, who graduated from the Western College of Veterinary Medicine (WCVM) in 2002.

After finishing her veterinary degree, Vermeulen worked in a small animal practice on Vancouver Island for a year. Next, she spent three years travelling throughout British Columbia as a pet food company representative. In 2006, she returned to private practice at Hillside Veterinary Hospital in Victoria.

When Vermeulen first moved to the city, a few veterinarians were doing occasional free clinics for pets owned by homeless people. But she quickly saw the need for a monthly clinic to ensure that these pets were receiving their annual vaccinations and regular parasite treatment.

Vets for Pets focuses on the basics: vaccines for rabies, kennel cough, distemper and other contagious diseases, parasite control and treatment of simple infections. The free clinics are open for two hours on the second Thursday afternoon of every month except in February and July.

The clinic's caseload varies from month to month. For example, during the February clinic, volunteer veterinary staff cared for 40 dogs, 59 cats, three ferrets and a rabbit. On any given month, the Vets for Pets team can include up to eight veterinarians, a half-dozen veterinary technologists or assistants, and two or three pre-veterinary students.

One of the clinic's past volunteers is Kristin Zajaczkowski, a fourth-year WCVM veterinary student. She started volunteering at Vets with Pets while she was an undergraduate student at the University of Victoria, and she considers Vermeulen as one of her mentors.

As Zajaczkowski explains, Vermeulen always seems to find a way to help promote a pet-owner relationship even when money is a problem. 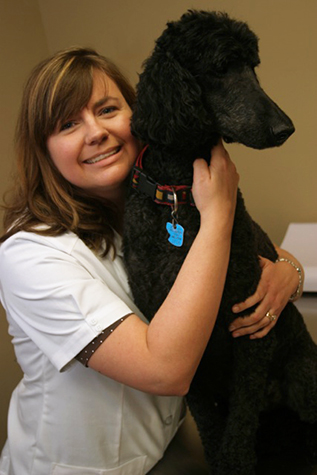 Vermeulen points out that it's often difficult for pre-veterinary students to get meaningful animal health experience beyond standing in a corner and watching surgeries. Vets for Pets gives them the opportunity to interact with pet owners, keep medical records and familiarize themselves with medical terminology.

Vets for Pets receives all of its funding through private donations and industry partners. For example, two animal health companies — Merck Canada and Zoetis — provide the clinic's supply of vaccines and parasite control products.

Vets for Pets also partners with the Victoria branch of the SPCA and the city's Pet Food Bank so eligible pet owners can pick up pet food and even leashes for their dogs during the monthly clinics.

For Vermeulen, another benefit is the chance to see and be part of happy endings to people's stories — such as the story about the man living in his car with his two cats. Several years after their first meeting, the man brought his cats back to the free clinic for their vaccinations. He had good news to share with Vermeulen: he was no longer living in his car. Instead, he had an apartment where he was able to have his cats with him.

Shirley Byers is a writer and editor from Kelvington, Sask. She freelances for a variety of North American magazines and newspapers.