On a warm day in mid-September 2014, Cora Hohenberg noticed that one of her family's Gypsy stallions, Black Forest William, was down and looking distressed.

"We thought he had colic," says Cora, who operates Cyclone Gypsy Horses with her husband Karl on their farm near La Broquerie, Man. "We got him up and got him walking — then he had a bowel movement, so we thought we'd just keep an eye on it."

But by the next morning, William was down again. Since the horse showed no typical colic signs and had been fevered for more than eight hours, Olson referred the case to Elders Equine Veterinary Service in Winnipeg, Man.

"By the time we got there [to Elders Equine], it was already 8 p.m. in the evening," says Cora. "They ran some tests and his blood values were in the toilet. The diagnosis was suspected colitis."

Dr. Gillian Dobson (WCVM '13) at Elders Equine referred William to the Western College of Veterinary Medicine's Veterinary Medical Centre (VMC) where he would have access to the specialized resources needed to deal with a serious colitis case.

The Hohenbergs and their horse spent the next nine hours on the road. By the time he arrived in Saskatoon, William had developed diarrhea along with his fever.

"The horse was lethargic and severely dehydrated," says Dr. Carolina Durán, a large animal internal medicine resident at the WCVM. "We could also determine from the blood work results that there was a severe systemic inflammatory process, likely due to a primary inflammation of the colon. We started aggressive treatment right away with intravenous (IV) fluids. When horses get profuse diarrhea, they can die from dehydration and loss of electrolytes if left untreated."

"Dr. Durán told us to call them when we were a half-hour out so they could be waiting when we arrived," says Cora. "When we made it in [to the VMC], we were just so impressed. It was amazing — it was like going to an ER at a human hospital. They got him right in and started hooking him up. The IV was in within minutes. We were just mindblown — we had never seen anything like that."

A physical exam and blood test confirmed a diagnosis of enterocolitis of unknown origin but likely caused by a bacteria or parasite. In addition to testing for the most common colitis-causing bacteria, attending clinicians decided to test William's blood and feces for Neorickettsia risticii — the bacteria that cause Potomac horse fever (PHF). 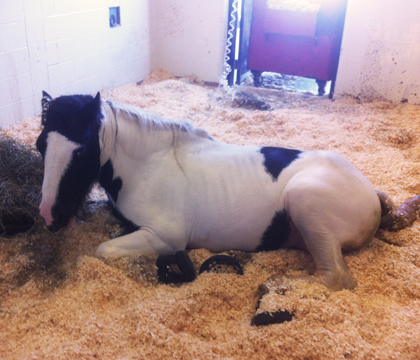 PHF isn't common in Canada, but cases have been confirmed in Alberta, Manitoba and Ontario. The disease is associated with warm late summer and fall weather in areas close to a river or stream (within about eight kilometres). The bacteria that causes PHF is primarily spread among horses when they ingest infected aquatic insects.

When diagnostic tests confirmed that William was suffering from PHF, the WCVM clinical team immediately started the horse on a specific antibiotic drug to target the bacteria.

"We commonly don't treat enterocolitis with antibiotics unless we can identify a certain bacteria we are trying to target, so we know there is a benefit of adding antibiotics to the treatment plan," explains Dr. Fernando Marqués, a specialist in large animal internal medicine at the WCVM and senior clinician on William's case.

"This was one of those examples where it was necessary."

With treatment, William's stools began to firm up immediately — but he developed laminitis, a common side effect of colitis that PHF-affected horses are particularly prone to developing.

Fortunately, the WCVM team had immediately iced William's feet on his arrival, and the stallion spent much of his time lying down — two factors that helped decrease the severity and impact of laminitis. The team also used soft hoof boots to keep William as comfortable as possible.

"In a way, you need to be ahead of the game, because when these guys come [intensive care cases], they are ahead of you by far," says Marqués.

He adds that when a horse needs intensive supportive care, clinicians must fine tune the animal's treatment plan every single day, and more commonly, multiple times a day. It's a delicate balance since the clinical team must constantly address fluid and electrolyte losses.

Another essential is immediate access to commercial blood products such as synthetic colloids and plasma. These products replace lost blood proteins that a horse needs to keep the fluids within the blood vessels — avoiding fluid leakage into the tissues.

Isolation stalls are also needed for biosecurity: they protect the ill horse as well and eliminate the potential infection of other equine patients.

Then there's the human element. At the WCVM's Veterinary Medical Centre, there are normally two veterinarians involved in intensive care cases to cover day and night shifts. They work along with a board-certified, senior internal medicine veterinarian and are assisted by certified veterinary technologists as well as a number of veterinary students. 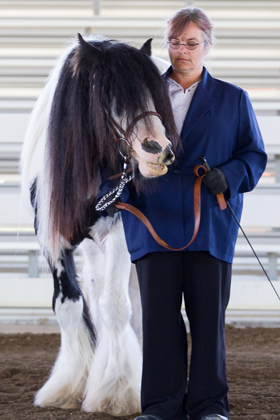 "William was such a personality. For the students who had their first experience with intensive care, he was a wonderful patient. You had to coax him with bread rolls, his favourite treat. He's a smart horse," says Dr. Felicity Wills, a clinical intern in large animal internal medicine who assisted Durán and Marqués with William's primary care.

"He's quite the comedian," says Cora. "He sits like a dog in his shelter outside and watches the birds fly around. If you're bent over doing something, he'll flip you into a water trough. But you can drive him double with an open mare and you'd never know he's a stallion. He's better behaved than most geldings."

Originally imported from England, William has been shown all over North America. The purebred Gypsy stallion has multiple championships and is very well known within the breed.

He also has his own fan club. Members were instrumental in his recovery, holding an online auction to help raise funds for his 12-day stay in intensive care at the WCVM's Large Animal Clinic.

William has been making great progress since he came home in early October.

"We finished his treatments for hind-gut ulcers," says Cora. "He's gaining weight like crazy; he's got some muscle atrophy [because he lies down a lot] so I've been doing muscle rubs. Now I've got him going for walks — we did three-quarters of a mile the other day. And he has no signs of laminitis."

The Hohenbergs will bring William back to the WCVM Veterinary Medical Centre this spring for a check up — and to potentially collect and freeze some of the stallion's semen.

"It's such an amazing place. I would recommend anybody go there," says Cora. "I was given such a feeling of confidence — the professionalism was amazing. They really cared about him."