After 27 days trapped in a cold and wet three-metre hole, Bruno was found on Oct. 14 – but his recovery would take even longer.

"We're so excited," says owner Cindy Billesberger, who brought Bruno to Saskatoon. The family's local veterinary clinic, Prairie Animal Health Centre, treated Bruno for a few days, but then referred the dog to the specialized medical centre after bloodwork showed his phosphorous levels were dangerously low.

Billesberger says her family is grateful for the care provided by animal health teams in Estevan, Weyburn and Saskatoon.

"You've got such a feeling of helplessness when you pull an animal out like that, and they're suffering and there's nothing you can do. There was no way we could take care of him," she says. "Knowing there is somebody there that can take over … [who has] the knowledge and expertise and the strength. It's the strength of character that it takes to see an animal in that kind of shape and put that aside and do what needs to be done. That's huge."

Bruno's remarkable story made headlines across North America, but behind the scenes, a dedicated team of veterinary clinicians were working around the clock to make sure he pulled through.

"When he came in, he was barely walking. He was miserable. The only time he would look at us is when we had food," says Dr. Alison Khoo, the small animal internal medicine resident who managed Bruno's case.

"Now he's like a different dog. He loves going outside. He's still very food motivated, but he's got a lot of energy back and he's starting to show more of his personality."

The clinicians who worked on the case credit the collaborative care he received from the WCVM team that included small animal internal medicine specialists, a clinical nutritionist, canine rehabilitation therapists, small animal surgeons, veterinary technologists, veterinary students and the team of people in the VMC's intensive care unit (ICU). 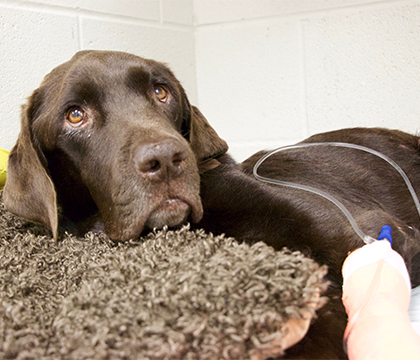 When Bruno was admitted, he had what is known as "refeeding syndrome" a condition that's rarely seen in dogs.

The clinicians drew on the expertise of clinical nutritionist Dr. Tammy Owens to assist with carefully increasing the amount of food that Bruno could receive and properly supplementing his intake of essential electrolytes: phosphorous, magnesium and potassium.

The team referenced literature on refeeding syndrome in cats and in humans – the treatment Bruno received is similar to the protocol used to treat humans recovering from anorexia nervosa.

When an animal that hasn't eaten for a very long time is suddenly given food, its body promptly releases a large amount of insulin. This causes a surge-like response and deficiencies in electrolytes. Without careful supplementation the body stops functioning properly, and the patient dies.

Bruno's electrolyte levels were constantly monitored and supplemented intravenously until they stabilized — a process that took two and a half weeks. His digestive system was also extremely sensitive to the new food being introduced.

"There is a multitude of reasons why — in those patients — you can't just feed them normally and expect a good outcome. They're not physiologically capable of absorbing and utilizing the food normally," says Owens.

Dr. Sue Taylor, an internal medicine specialist and professor of small animal medicine at the WCVM, was in charge of Bruno's case alongside Khoo. She commends the close care provided by the ICU for monitoring Bruno 24 hours a day, providing three different continuous intravenous infusions, and for feeding him a precise amount of food several times per day.

"We could do this because we have 24-hour technical support," says Taylor.

The team also drew heavily on the expertise of VMC's surgeons who managed the wounds on Bruno's paws that occurred when he tried to claw his way out of the well. Sores also developed on his paws after he sat in water for nearly a month.

The VMC's canine rehabilitation team administered cold laser therapy, which proved effective in treating the wounds on his paws and his hindquarters. This technique stimulates the cells, speeds healing and reduces pain.

"The difference in his feet is unbelievable," says Dr. Kira Penney, a clinical associate and certified canine rehabilitation therapist at the WCVM.

This treatment helped Bruno heal without having to undergo surgery, which would have been difficult due to his already delicate condition.

"The fact that we are able to pull from so many different resources — and everyone has been so willing to be involved in this case — obviously contributed to how quickly he recovered," says Khoo. 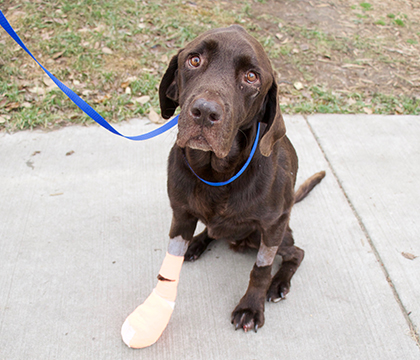 Khoo, Taylor and Owens plan to collaborate on a scientific case report documenting Bruno's remarkable recovery, and their work could help other veterinarians who need help dealing with refeeding syndrome in dogs.

"Because these cases are rare, it was exciting to make a good contribution to a case that's going to have a good outcome," says Owens. "I think the best cases are those that have a collaborative approach, because the patients get the best care."

"When he first came in, he still looked like he was in trouble," says Khoo. "I don't think many dogs would have survived this. To continue to see him improve has been so rewarding."

All three clinicians commend Bruno's owners for their patience and understanding, and for the community of people who have called in to donate to Bruno's care and to support the family.

"We're very happy the owners have been so understanding of the fact that it has taken us so long," says Taylor. "They've accepted that we need to take things slow and that we need to do so much monitoring before getting him home. It's nice that they were patient enough to let us do what we needed to do."