The national equine sport organization's rule change regarding firocoxib's use came into effect on Jan. 1, 2016.

During their careers, many high-level performance horses sustain injuries that require treatment with an effective anti-inflammatory drug. Even minor inflammation and pain can translate into poor performance, shortened careers and vulnerability to more severe injuries.

Given these consequences, there are many medications used in performance horses — but there is only a short list of such medications permitted for use during Equine Canada-sanctioned competitions. Previously, that list has only included NSAIDs approved for use in Canada, and it didn't include firocoxib. The drug is approved in the United States where it's known by its brand names: Equioxx® for horses and Previcox® for dogs. Only Previcox® for dogs is approved in Canada.

Despite its lack of label approval in Canada, veterinarians have found that the canine-approved Previcox® was effective to treat minor pain in horses. While there are several other NSAIDs on the market, veterinarians favour firocoxib in some cases because it has a good safety profile, it's cost-effective and easy to administer by horse owners.

In most cases, this extra-label use of the drug isn't a problem. But at the elite performance horse level, such as at Equine Canada-sanctioned events, testing positive for firocoxib resulted in disqualification from the competition and major fines for those responsible for the horse.

With a "zero tolerance" for firocoxib, the detection of any amount of drug in a blood or urine sample from a horse resulted in a violation, explains Dr. Trisha Dowling, a veterinary pharmacologist and professor at the WCVM.

"And as firocoxib is only slowly eliminated from a treated horse in its urine, horses can test "positive" for weeks after discontinuing the treatment," adds Dowling.

Variations in drug rules between the United States (where firocoxib is permitted by the U.S. Equestrian Federation) and Canada could even be deterring people from participating in Canadian events.

"I know a number of people who just choose to show in the States," says Dr. Mary Bell, an experienced competitor, veterinarian and former chair of the Equine Canada medication control committee.

"At one time, there were a number of NSAIDs licensed for horses in Canada. Piece by piece they just went off the Canadian market." 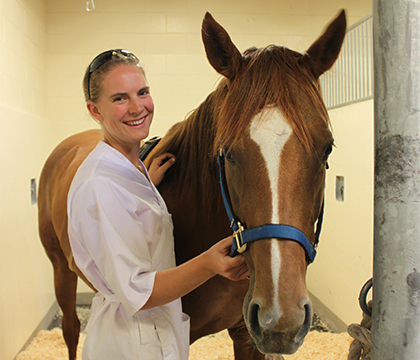 Bell says Equine Canada's decision to consider the off-label use of a licensed product such as Previcox® was stimulated, in part, because of a series of "drug positives" that resulted from a contaminant present in a compounded oral NSAID that is no longer available as a licensed product in an oral form.

With no hope of label approval on the horizon, the only option for Equine Canada regarding firocoxib was to make a rule variation allowing the extra-label use of the canine Previcox® tablets.

"In order to make an exception, what we really needed was the opportunity to have some quantification, some measurement of the urine and plasma concentrations in horses treated with normal doses," says Bell.

During the summer of 2015, Dowling and veterinary student Jessica Semper conducted a depletion study to determine the concentration of firocoxib in equine urine and plasma after a typical treatment regimen. The project's data would enable Equine Canada to make an informed decision and to set limits for firocoxib's use in performance horses. The WCVM study was supported by a grant from Equine Canada's Equine Medication Control Committee.

The WCVM research team treated 10 light horse mares with one 57-milligram Previcox® tablet per horse each day. After 14 days of treatment (the length of treatment recommended on the drug's U.S. label for horses), researchers regularly collected blood and urine samples from the horses over a 24-hour period.

The samples were sent to Maxxam Analytics, Equine Canada's approved drug laboratory, for analysis. Once the WCVM team members completed their interpretation of the resulting drug analysis, Dowling made her recommendation to Equine Canada, which resulted in the rule change permitting the use of firocoxib during Equine Canada-sanctioned competitions.

If firocoxib is administered to horses in excessive doses, violations may be called for exceeding the study-generated threshold concentrations for blood and urine.

Equine Canada's decision to allow the appropriate extra-label use of the canine Previcox® tablets may help to alleviate the frustration that riders, trainers and owners experience when competing in Canada.

Bell says if a licensed firocoxib product for horses eventually becomes available, off-label use of Previcox® will be no longer be approved by the national organization.

"However, the detection times provided through this study will continue to be very applicable."

Jessica Semper of Nanaimo, B.C., is a third-year veterinary student who was part of the WCVM's Undergraduate Summer Research and Leadership program in 2015. Jessica's story is part of a series of stories written by WCVM summer research students.