According to a 2003 study, 70 per cent of ferrets in the United States were affected by adrenal disease —which often is fatal if left untreated.

"It is one of our top three bad diseases that ferrets get. It's a really important one for owners to know about since it's so common," says Dr. Miranda Sadar, an assistant professor of zoological, exotic, and wildlife medicine at the Western College of Veterinary Medicine (WCVM).

The adrenal glands are small organs located just in front of the kidneys and close to major blood vessels in the ferret's body. The right adrenal gland is especially close to a major blood vessel — the vena cava. The glands produce adrenaline, cortisol, sex hormones and several other important hormones. In ferrets diagnosed with adrenal disease, the portion of the adrenal gland that produces sex hormones goes haywire and generates excessive amounts of hormones.

Although veterinarians are not sure why ferrets develop adrenal disease, Sadar says excessive light exposure, genetics and early neutering may play a role.

Ferrets are typically diagnosed with the disease after the age of three, but it can affect pets of all ages. The clinical signs are variable: they may be subtle or obvious, and can progress rapidly or slowly.

"Some will get the hair loss and that's it," says Sadar.

In females, the one typically progressive sign is estrogen toxicity — a deadly issue that usually develops late in the disease. Before that sign occurs, the affected female often presents with hair loss or an enlarged vulva.

"For the boys, their prostate gets big. So what owners end up seeing at home … is that they [the male ferrets] are going to the litter box constantly," says Sadar. "They just don't realize it's an obstruction … the prostate has just squished the urethra so much they can't pee."

Usually Sadar says the disease is tentatively diagnosed based on clinical signs, then veterinarians use an adrenal gland ultrasound examination to confirm the diagnosis. If the ultrasound results are not definitive, a blood test is available in the United States to evaluate the level of hormones in the blood.

Sadar also suggests that owners have their affected female ferrets' blood regularly checked for signs of anemia — a late-stage sign of the disease that is the result of estrogen toxicity.

Pet owners have two options for treating adrenal disease: surgical removal of the affected adrenal gland or lifelong medical management. Most of the medications, including deslorelin acetate and leuprolide acetate, initially stimulate release of reproductive hormones. After the initial hormone release, either drug inhibits further production of the sex hormones.

"They get everything ramped up, and then you end up getting a negative feedback. So with those treatments — whether it be Lupron [leuprolide acetate] or deslorelin implants — often we will see worsening clinical signs before we see them get better." 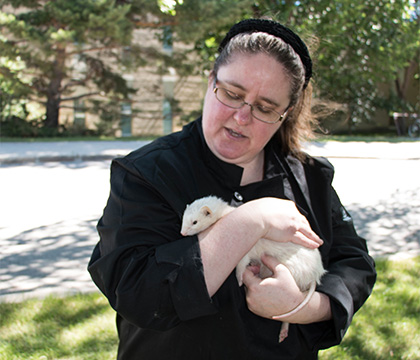 "[I'm] not interested in losing a ferret in surgery," says Naughton. In addition to drugs, Naughton modifies husbandry practices for her affected ferrets by providing heated beds, administering melatonin and modifying their diet.

"The hairless, ‘Golem-looking' one is Chunk. He is full-blown adrenal. He's advanced to the stage where it's gone too far [to treat]," she says.

Naughton has found that a high fat, high protein diet helps to give "extra life" to her affected pets.

"We give them a very high-calorie diet for the ones on deslorelin with adrenal disease because as you can see with Chunk, [the disease] burns them up. It's like throwing gasoline onto a fire — they just really go."

Naughton points out the small deslorelin implant under Chunk's hairless skin that was inserted under the skin with a needle, just like a microchip. Affected ferrets typically need a new implant every year to a year and a half — a big improvement from the older treatment that often required monthly injections.

Her ferrets are also prescribed melatonin to supplement the deslorelin. Melatonin is a hormone naturally produced in the brain when animals are exposed to darkness.

It helps to prevent itchiness that's caused by adrenal disease. "It also helps out with the hair loss … it doesn't prevent it, it doesn't cure it, but it is good for them overall," says Naughton.

Her other ferrets also have deslorelin implants, but unless someone felt the devices under their skin, no one would know that they have the condition.

"Basically the implant is not going to correct the disease; it's just going to control their clinical signs," says Sadar. "Hopefully the [prostatic] cysts will regress a bit and they'll be able to urinate, their vulva [swelling] will go down, they won't have estrogen toxicity anymore and their hair will grow back. Whereas with the adrenal surgery, you take that [affected adrenal gland] out so all those [clinical signs] go away."

"Fortunately a lot of them respond really well [to deslorelin]. It's great to see an obstructed ferret come in and then be able to urinate again. It's very rewarding," says Sadar.

"Deslorelin, from what I've seen with my guys, is one of the best things out on the market. Definitely the person who developed it needs to be nominated for ferret sainthood, because it's very gentle on them — it's non-intrusive," says Naughton. She adds that even the injection process doesn't seem to bother the ferrets as long as they are distracted with treats.

"I think it's a wonderful thing."

Gwen Roy of Edmonton, Alta., is a third-year veterinary student at the Western College of Veterinary Medicine (WCVM) and a wildlife biologist.
Share this story