"Thirty years ago, seeing moose in the farmland of Saskatchewan would have been very rare but over time they have expanded to these new areas," said Ryan Brook, a wildlife biologist with the Department of Animal and Poultry Science at the U of S. "It's unique to see populations well-established in areas with less than one per cent forest cover and dominated by crop production."

Brook, who leads the Saskatchewan Farmland Moose Project, is working with colleagues to discover how the moose are succeeding in what used to be considered highly unsuitable habitat. The research team used a net gun fired from a helicopter to capture 40 adult cow moose and fit them with GPS satellite collars in 2013 and 2014 to track the animals' movements for four years.

The team found that the animals are taking advantage of the area's "knob and kettle" land forms, that is, rolling hills with plentiful tree-ringed sloughs and wetlands. During the heat of the summer days—"hot" for a moose being above 14 C—the animals retreat to shade and water, coming out to feed once it cools off.

The team's finding are published in the Journal of Wildlife Management. Brook explained this is the first paper ever published on farmland moose, detailing specific ways that moose select habitat. It also maps overall habitat quality in both summer and winter, which will help support management efforts.

Unfortunately for farmers, what the moose are feeding on is often crops, particularly cereals but also oilseeds such as canola. Crop damage is becoming a concern, particularly in the south central part of Saskatchewan. 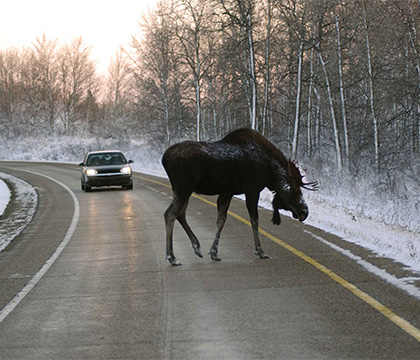 Moose are also hazardous for drivers, particularly in Saskatchewan, which has the largest municipal grid road network in Canada. The animals' long legs and high centre of gravity create a high risk of driving the main body of the animal through the windshield. Since cows can weigh up to 360 kg and bulls up to 700 kg, collisions can be catastrophic.

Brook explained that since moose have only recently started moving south, there has been little information available to guide management efforts, which makes the study vitally important.

"There has not been any previous research on farmland moose, so a first step is to understand the ecology of these animals to understand habitat selection," he said.

Brook and his colleagues hypothesize that the moose are also doing well because farmland areas have few or no large predators like wolves or bears that keep populations in check in the boreal forest.

For now, the province has instituted moose hunting seasons in the affected areas. When feasible, farmers can also protect their crops by fencing off sloughs and associated treed areas to deprive moose of their daytime refuges.

Data collection for this study has neared conclusion and more results are expected in 2016. Funding for the work was provided through the Saskatchewan Fish and Wildlife Development Fund, the Saskatchewan Ministry of Environment, the Saskatchewan Wildlife Federation, the Cyril Capling Trust at the U of S, and the Natural Sciences and Engineering Research Council of Canada.

Graduate finds her own path in veterinary medicine and research

New flight pen is for the birds’ rehabilitation