"We let the dogs out to go play, like we always do – we live on a big acreage," explains Kennedy-Bush. "Someone came into our yard to turn around  … and I guess they ran my dog over."

He found his new puppy Angus, a three-month-old giant Alaskan malamute, screaming in pain and unable to walk.

Kennedy-Bush rushed Angus to a Kindersley veterinary clinic, but the local veterinary team told him there was nothing they could do.

"They said if you want a chance, he's got to get to the city, so we rushed him to WCVM [the Western College of Veterinary Medicine]."

Dr. Jo Anne Au Yong, a clinical intern at the WCVM Veterinary Medical Centre, was one of the small animal veterinarians who initially assessed Angus when he arrived in Saskatoon. The puppy's vital signs indicated he was in shock, so the clinicians immediately began treating him with intravenous fluids, pain-killing drugs and supplemental oxygen.

Although the veterinary team suspected multiple fractures, it was impossible to take X-rays of Angus until his vital signs could be stabilized. It was also very painful for him to be lifted or moved. Eventually, the clinical team determined that Angus had suffered a traumatic lung injury.

"Normally you won't see lung contusions (injured tissue) on chest X-rays until about 24 to 48 hours after the inciting trauma happens," says Au Yong. "In his case we could see it immediately, which means it was quite severe."

Au Yong stayed with Angus in the hospital's intensive care unit (ICU) until midnight. When the young dog's condition deteriorated overnight, the VMC's anesthesia team recommended that Angus be placed on a mechanical ventilator. After Au Yong discussed all aspects of Angus' case with Kennedy-Bush, he gave his consent to go ahead.

While Angus' condition was very critical, his owner's determination to continue the treatment inspired the team to rally around Angus to do whatever they could to save his life.

"It was determined that he was having a lot of trouble breathing and probably wouldn't survive the night without additional support," says Au Yong.


"Teamwork is what allowed Angus to survive. His case brought together the entire small animal team, and this success story has continued to inspire us."


Angus' clinical team was also worried about the dog's kidney function: "We were concerned that the amount of urine that he was producing was not matching [the] amount of fluids being given," says Dr. Jewel Milo, a resident in small animal internal medicine who had been in close contact with Au Yong about Angus' case through the night.

To address this problem, the veterinary team gave Angus furosemide, a diuretic drug that helps to decrease fluid build-up and is often given to patients with congestive heart failure. After treatment, Angus produced a large quantity of urine through his urinary catheter – a hopeful sign.

Angus was alive, but his clinical team was concerned about how long he could remain on the ventilator. Each day on the machine cost Angus' owner about $3,500, and it wasn't clear when or how the clinicians could take him off the support system.

"Being a dog his size (26 kilograms), drugs were using up the majority of the money for his hospital stay. He was on a number of medications to keep him unconscious and to address his pain," explains Milo.

Angus needed a whole blood transfusion along with two sets of plasma. He was on a broad-spectrum antibiotic drug since the clinicians were concerned about him acquiring a secondary bacterial infection from blood in his lungs. As well, the veterinary team gave him metoclopramide, a medication used to promote emptying his stomach and intestines, since they were concerned about regurgitation.

They were also concerned about how to get nutrients into Angus.

"Usually when we have dogs in the [ICU] crib, the type of tube we use to feed them would be a nasal-esophogeal feeding tube," says Milo. "This was not an option for Angus because of the oxygen lines going in.

"Our ultimate goal was to get him off the ventilator." 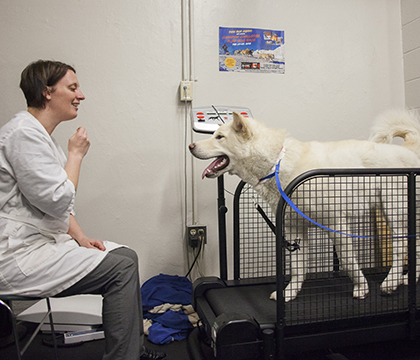 By about the third or fourth day of Angus' stay in the hospital's ICU, a decision had to be made about his future.

"Everyone was staying positive, but the general thought was he wasn't going to make it," says Kennedy-Bush. "By Thursday night, Dr. Milo and [VMC director] Dr.  Duncan Hockley sat me down and prepared me for the worst."

On Friday morning the team tried taking Angus off the ventilator for the last time. Their previous attempts to wean the dog off the machine hadn't been successful, but this time was different.

The day before, the team had also placed a tracheostomy tube in Angus' windpipe. Once he was taken off the ventilator, the breathing tube ensured that the puppy had a steady supply of oxygen in case the swelling in his facial area and larynx prevented him from breathing properly.

"We stopped the ventilator and everybody just kind of waited, hoping he would continue to do well," says Milo. "He [Angus] was off for almost an hour and still doing well, and awake at this point. His dad [Kennedy-Bush] kept telling us he's very food motivated — he's going to want to eat when he wakes up. And he did."

Milo adds that when dogs wake up after being unconscious for so long, usually the biggest challenge is getting them to eat. Kennedy-Bush believes the breathing tube played a role in Angus' recovery by allowing him to be able to eat once he was awake.

"He survived the odds," says Milo, smiling. "I'm still amazed at this dog, at how well he's done. There are not many dogs that have been on a ventilator for five days and come off. The last set of X-rays that were taken of his lungs looked great."

Angus' story is remarkable, but it speaks to the skill and determination of the team who took care of him through those critical first days.

"The team never gave up, even though the probability of improvement was unlikely," says Hockley. "Teamwork is what allowed Angus to survive. His case brought together the entire small animal team, and this success story has continued to inspire us."

Despite his remarkable recovery, the difficulty didn't end after he regained consciousness -- Angus has had some residual challenges from his ordeal. After coming off the ventilator, he had several seizures that were successfully controlled with medication and have not returned.

In addition to his fractured ribs, veterinarians also discovered that Angus had a broken femur. This injury eventually required a femoral head ostectomy (removal of the head of the femur or hip bone) that was performed by surgical specialists at the WCVM.

Dogs typically do very well after this type of surgery, as their bodies create a "false joint" of fibrous scar tissue resulting in a minimal loss of mobility. Angus has been having regular therapy visits to the VMC's pet rehabilitation therapy centre to help him regain normal use of his left hind leg, which is shorter than his right hind limb.

Initially, Angus wasn't bearing weight on left hind leg and was dragging his toes on his right hind foot when he moved forward. But with the help of the WCVM rehabilitation team, the young dog is making progress.

"I'm amazed at how well he runs," says Kennedy-Bush, who doesn't regret his decision to save his young dog despite the extensive medical costs.

Because Angus' case was complex and provided a number of teaching opportunities for the college's clinical team, the VMC was able to offset a small portion of the expenses to assist Kennedy-Bush with his dog's medical fees.

"We only had Angus for a month and a half when he got run over. I'm a softy — I couldn't let him go. I had to try. Everyone at that hospital was very kind and very good.

Christina Weese, BDes, is a freelance writer, graphic designer, photographer and avid equestrian who lives near Saskatoon, Sask. Since 2008 she has also been the editor for the Canadian Arabian Horse News.