"There are a lot of cases of cats with liver disease. The cause of ILD is largely unknown and there are few things we can do to treat the disease, especially in advanced stages," says Al-Dissi, an assistant professor in the Western College of Veterinary Medicine's (WCVM) Department of Veterinary Pathology.

Some of the clinical signs of feline ILD include a loss of appetite, vomiting, diarrhea, jaundice, excessive urination and thirst. As the disease progresses, fibrosis (a build-up of connective tissue) increases and liver function decreases in the affected cat, worsening its clinical outcome. In extreme cases, ILD will eventually cause death.

Al-Dissi is leading a study that may help researchers gain a better understanding of the defensive response initiated by the feline liver — information that could lead to the development of a better treatment option for cats with ILD.

"The focus is shifting from identifying causes of liver damage to understanding mechanisms (of disease and defense) within the liver," says Al-Dissi, whose study is supported by the WCVM Companion Animal Health Fund.

His research project examines the presence and the ability of metallothionein (MT) — a heavy metal-binding protein — to potentially reduce microscopic markers of liver disease, such as inflammation and fibrosis.

"The main role of metallothionein is to protect against damage caused by heavy metals," says Al-Dissi. "It has a high binding capacity to such heavy metals as copper and zinc."

Cells synthesize MT when heavy metals build up in the body. MT tightly binds to free metals to restrict their ability to damage liver tissue, but evidence has shown that MT does more than just remove free heavy metals.

"(Additionally), it has been shown to reduce liver inflammation, decrease fibrosis and help the liver regenerate," says Al-Dissi.

These observations are the basis for Al-Dissi's research study in which he and his graduate student, Dr. Jolanda Verhoef, will compare MT levels to the amount of inflammation seen in ILD-positive tissue samples.

"We're going to retrospectively examine metallothionein in cats with and without ILD," says Al-Dissi. "Of the ILD samples, some will be chronic cases and some will be acute cases. The prediction is that when we see increased metallothionein, we will see reduced fibrosis and increased liver proliferation." 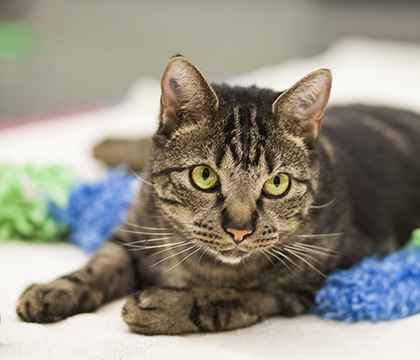 To examine the effect of MT on ILD, Verhoef will analyze various liver samples at different levels of ILD progression. Within these samples, she will compare MT levels with the degrees of inflammation and fibrosis to see how they relate. The researcher will also correlate the MT levels with liver re-growth.

Scientists have never performed these experiments in cats, but they're not without precedent. Al-Dissi recently published results from similar analyses conducted on canine livers that were affected by primary hepatitis, and he's using that study's trends as the basis for his predictions in the feline experiments.

In addition to examining MT expression in cats, Al-Dissi is running a similar study in horses to evaluate the effect of MT on equine liver disease.

As the causes of many liver diseases across animal species are largely unknown and very difficult to determine, studying and enhancing ways in which the liver defends against injury is a novel alternative.

Al-Dissi sees MT as a promising tool in the treatment of liver inflammation in cats, horses and other species. One day the protein may even improve the outcome of human patients dealing with acute and chronic liver inflammation.

Regardless of the type of treatment that may eventually be available for cats diagnosed with ILD, timing of a diagnosis is always key, says Al-Dissi. He advises owners to visit their regular veterinarian if their cat is showing signs of continued discomfort.

Brenden Van Wyk is a Master of Science (MSc) student at the Vaccine and Infectious Disease Organization (VIDO).