The puppy had been sleeping under the car, and Woodvine unknowingly backed over the then four-month-old, mixed-breed farm dog.

Sharley was in such extreme pain that she snapped at Woodvine and her partner Brian Stephenson. They quickly wrapped the puppy in a blanket and loaded her into the car, heading for the Western College of Veterinary Medicine's (WCVM) Veterinary Medical Centre (VMC).

The 20-minute drive from their acreage felt like an hour.

"That was the most agonizing ride. She screamed every bump I hit and every time I shifted she would cry. It was pretty bad," says Woodvine.

As soon as they arrived, Sharley was wheeled into a treatment room where clinicians quickly discovered that the dog had a fractured and dislocated vertebrae. The VMC team initially gave the dog a 70 per cent chance of recovery, but after taking further CT (computed tomography) scans of Sharley's shattered spine, the veterinarians' prognosis was less hopeful. They weren't sure she'd ever walk again. 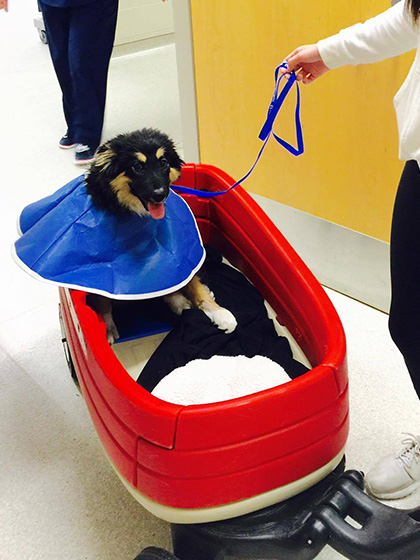 The decision was heart breaking, and the family filled out the paperwork for euthanasia.

At the last minute, when Sharley was brought into the room for a last goodbye, Woodvine and Stephenson changed their mind.

"They wheeled her in, and her looking at us, we both had tears in our eyes. I knew. We said, ‘We can't do this, let's do the surgery,'" says Woodvine.

Small animal surgical specialists immediately began a three-hour procedure. They placed pins in the bone and cemented them together to stabilize the sixth lumbar vertebrae.

The fracture was "very significant," says small animal surgery resident Dr. Koji Aoki. Initially he wasn't sure whether she'd be able to walk again, but Sharley quickly began to show signs of recovery.

The puppy began physiotherapy three days after the procedure. She needed to learn how to stand and walk again, and nerve damage complicated her case.

Sharley went home, and the days following the surgery were tough. Her owners had to carry the injured dog in and out of the house and try their best to keep her calm.

"There were times when we said, ‘Did we made the right choice? I think we made a mistake,'" says Woodvine, recounting their daily struggle to improve Sharley's mobility.

Four days after her surgery, Sharley could move one of her back legs. Twelve days after the surgery, she could get up by herself and support her own weight, although her toes were still dragging. 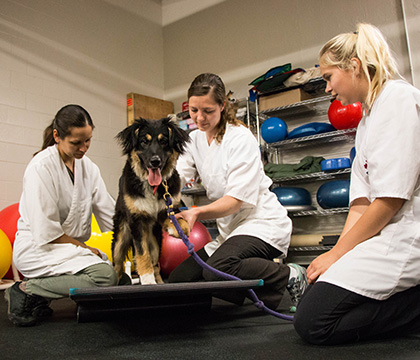 Pinto used the veterinary medical centre's aquatic treadmill to help with rehabilitation exercises, but she says most of the hard work was done at home.

"They [puppies] have a short attention span. They want to chew on everything and they don't always want to stay still for treatments," says Pinto.

Pinto commends Woodvine and Stephenson for their dedication to Sharley's well-being.

"Her owners were really committed and working really hard to do the exercises, so she was a very rewarding case," says Pinto.

"They did a great job. She's a pretty amazing puppy."

Persistence and hard work paid off for their family. Eight weeks after the accident, Sharley bounced into the VMC for her final series of X-rays before her veterinary team gave her a clean bill of health.

"We made the best decision," Woodvine says.