This is when Dr. Trent Bollinger, regional director of the Canadian Wildlife Health Cooperative (CWHC) and a veterinary pathology professor at the Western College of Veterinary Medicine (WCVM), became involved.

Fish simultaneously die in large numbers for all sorts of reasons — everything from dissolved oxygen depletion, stressful water temperatures, high levels of dissolved ammonia and nitrite and toxins to algae blooms and infectious disease.

Fish may even die en masse naturally, as can be seen every year in British Columbia when chinook, coho, sockeye, pink and chum salmon swim upstream rivers to spawn and die.

The variety of factors at play in any body of water makes it difficult for researchers to determine the direct cause of death, let alone establishing the numerous links among fish health and environmental factors.

In the case of the Buffalo Pound Lake fish die-off, CWHC researchers observed that the affected fish suffered from multifocal, cutaneous petechial hemorrhage (clusters of reddish or purplish lesions) and skin ulceration. Their gill arches were also degraded — a condition called branchial necrosis.

Back in the lab, researchers cultured significant numbers of Flavobacterium columnare from the skin and gill lesions. This gram-negative bacterium causes a highly contagious and often fatal condition called columnaris disease in fish.

The CWHC team had found the cause of death, but their discovery had only raised new questions.

Since columnaris disease can have an impact on most species of fish, why were only yellow perch affected? Was there some sort of stressor that made this particular species susceptible to the F. columnare infection? What role did environmental factors play in the die-off? 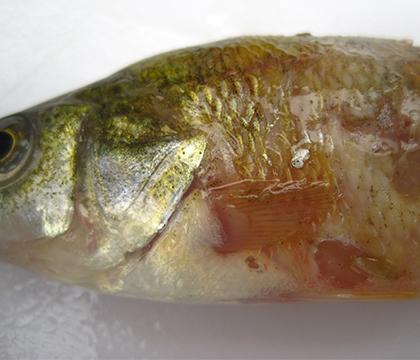 To complicate the investigation even further, the researchers discovered the presence of extensive, microscopic parasitic lesions in the central nervous system of yellow perch affected by the die-off. Myxobolus neurophilus is a myxozoan — a large group of parasites that can cause disease in a wide variety of fish.

What role, if any, did this parasite play in the die off? Many of these questions may never be answered, but in the years since the 2012 incident at Buffalo Pound Lake, the CWHC has been developing lake monitoring routines and investigative techniques to help characterize future fish die-offs.

Rigorous water quality monitoring routines have been developed and implemented on Blackstrap and Buffalo Pound Lakes. CWHC summer students have also conducted bottom sediment sampling in an attempt to identify and map the numbers of oligochaetes — bottom-dwelling worms that carry the myxozoan parasites, which are then eaten by the fish.

During the summer of 2015, Bollinger kept summer research students busy gathering information to prepare for the next die-off investigation. Although no mass die-offs occurred last year, the data collected will provide a baseline as environmental monitoring by the CWHC continues.

To better understand the interaction among the myxozoan parasite of yellow perch, fish health and the environment, students are also evaluating the swimming performance of wild captured yellow perch with variable parasite loads. If fish with high parasitic loads exhibit reduced swimming performance, it indicates that these fish are under increased stress and predation rates, and are possibly more susceptible to disease than unaffected fish.

Did especially high levels of parasitic infection during June 2012 in Buffalo Pound Lake indirectly cause the die-off by reducing the fish's natural defences to bacterial infection? Are yellow perch subject to uncharacterized, natural population cycles? Is the species particularly sensitive to certain water pollutants?

Scientists will likely never know what exactly happened at Buffalo Pound Lake, but the 2012 incident continues to help researchers at the CWHC gain a better understanding of the next fish kill before it happens.

Jonathan (Jake) Graas of Calgary, Alta., is a third-year veterinary student who was part of the WCVM's Undergraduate Summer Research and Leadership program in 2015. Jake's story is part of a series of stories written by WCVM summer research students.