"It was my job to interpret the animal's behaviour, to tell people cool facts, to explain what the zookeepers are doing and to try and make the public [and children] feel like they understand what is happening at the zoo," says Fraess, who began his second year at the Western College of Veterinary Medicine (WCVM) in late August.

Fraess' unique résumé helped prepare him for the summer job. Originally from Sherwood Park, Alta., Fraess attended the University of Alberta where he also has experience training and teaching horseback riding lessons, and he spent time working at a petting zoo where his love for exotic animals came to light.

While his animal knowledge was clearly an asset, Kathleen Zary says it was Fraess' experience with children that landed him the job.

"Garrett has an overwhelming wealth of experience as a camp counsellor. First and foremost, we want to ensure that our students are comfortable working with children," says Zary, program co-ordinator for the Saskatoon Zoo Society.

"His advanced knowledge of biology, his genuine interest in animals and his desire to relay his animal knowledge to the children just became an added bonus for us."

Fraess helped lead school groups, summer camps and other on-site programs that are available through the Saskatoon Zoo Society. He spent his days explaining animal behaviour, co-ordinating enrichment activities for the animals and answering the never-ending questions that both children and adults have when they come to the park. 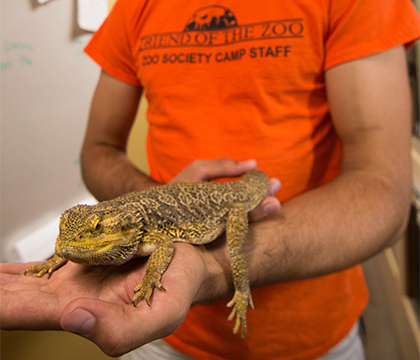 For Fraess, one of the most challenging aspects of his job was breaking down complex terms into simple language.

"It's just expressing facts to people in a way that makes sense to them," he says. "Sometimes it's easy to just give a fact about an animal, but I think the hardest part is remembering to link that to why it's important."

Zary also believes making that connection is the most important thing for guests to do when they come to the park.

"If you can actually talk to somebody about that animal and they learn why it's important in their local community, it just amps up that interaction and that experience," she says. "That is why we think it's really important to have those interpreters out and about."

Besides communicating with the public, the zoo interpreters work with a handful of socialized animals – such as Barkley the European domestic ferret, Kernel, a Schneider's skink (a type of lizard), and a burrowing owl named Sage.

Fraess hopes to pursue zoo medicine in the future, so the chance to handle exotic animals at such an early stage in his veterinary education was a wonderful opportunity.

"I am passionate about zoo medicine, but one of the problems with such a fringe aspect of veterinary medicine is that we don't get a ton of experience with zoo animals. This job definitely helps me become more comfortable with a wide variety of animals."

Does Fraess have a favourite animal at the zoo?

"That is such a tough question. I get asked that every time, but I honestly do not have a favourite. I always say that my favourite animal is the one closest to me." 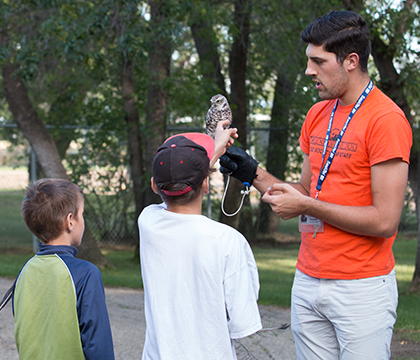 But if he had to pick just one, Fraess admits that he would choose Georgia, an eight-year-old North American porcupine. A family found the orphaned Georgia on the side of a road and tried to keep her as a pet, but they eventually gave her to the Saskatoon Forestry Farm Park Zoo. Because Georgia had spent so much time with humans, she can't be released back into the wild and is a permanent resident at the zoo.

"She has so much personality and so much sass. She tells us what to do as much as we tell her what to do. I think that's hilarious to watch," says Fraess.

Each day the zoo interpreters have to assist zookeepers in preparing the food and presenting it to the picky porcupine.

"If we've given her a carrot when she wants a yam, she'll take the carrot and throw it. She'll just ignore us for a little bit until we come with the food she wants, and I think that is just so funny."

Fraess' passion for the animals at the zoo seemed to rub off on everyone he met. He recalls what one little boy said to his mother when she came to pick him up at the end of the day.

Caitlin Taylor of Saskatoon, Sask., was the Saskatchewanderer for two years and photo editor at The Sheaf on the University of Saskatchewan campus for 2015-2016. She was the 2016 summer research communications intern at the Western College of Veterinary Medicine (WCVM).

The art of veterinary medicine