Unfortunately, nearly 50 per cent of dogs and 33 per cent of cats are diagnosed with cancer at some point in their lives.

In the past decade, veterinary researchers have made many advances in cancer therapy for companion animals, and it's becoming more common for pets to receive treatment.

During the summer of 2015, I was a research student with veterinary radiation oncologist Dr. Monique Mayer at the WCVM's Veterinary Medical Centre (VMC). My research project was a survey study that evaluated changes in companion animals' quality of life during palliative radiation therapy.

We collected data from veterinary oncology clinics across Canada and the United States, and we emailed surveys on a bi-weekly basis to clients who agreed to participate in the study. Survey questions focused on whether the owner's pet was experiencing any pain or discomfort, and whether the animal's quality of life had stayed the same before and after radiation therapy.

We also sent surveys to each client's veterinary radiation oncologist, asking questions about the type of tumour and treatment details for each patient.

Our study enabled us to follow up with families as their pets went through radiation therapy, and it also allowed the owners to assess their pets' quality of life.

The ultimate goal of our project is to help families decide whether radiation therapy is right for their pets. In addition, the results will help us find ways to improve the quality of life and duration of response for pets undergoing palliative radiation therapy.

One family who went through the process of palliative radiation therapy for their pet agreed to share their story. 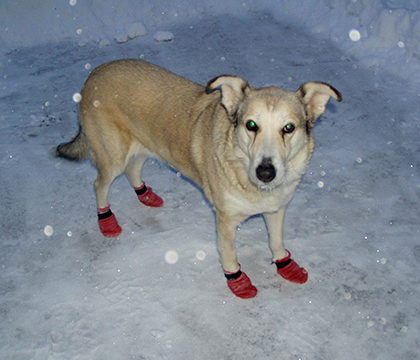 Sasha was the dog of Dana Brass and Chris Baraniuk's dreams. They rescued her from the Saskatoon SPCA in 1996, and according to her owners, Sasha was one great dog.

"She never ran away and was very gentle. We never walked her on a leash and had no worry of her veering from the sidewalk," says Dana.

When Sasha was eight years old, Dana and Chris noticed a lump on her neck and odd facial swelling, so they took her to their local veterinarian.

After the lump was biopsied, it was discovered that Sasha had thyroid carcinoma (thyroid cancer).

The tumour was blocking her blood and lymph drainage, causing her face to swell. Although the prognosis for thyroid carcinoma is quite good (with a survival rate of over two years), further tests showed that the cancer had already spread to Sasha's lungs.

At this time, the cancer in Sasha's lungs wasn't causing her any problems, but it was inevitable that she would experience issues within six to eight months. Once cancer has metastasized to the lungs, there is no cure.

The more urgent problem was the thyroid tumour blocking blood and lymph drainage; without any sort of treatment, Sasha's survival time was estimated at a few weeks.

Radiation oncologists use palliative intent radiation therapy to alleviate pain and discomfort in patients with incurable tumours. The goal is to improve quality of life by relieving cancer-related symptoms, not to cure or to extend survival time.

Dana and Chris had little previous knowledge about radiation therapy, but they weren't willing to say good-bye to their friend yet, so they decided to give it a try.

"She just didn't look or behave like she was sick. She still loved going for walks, was still eating normally and was able to carry on with her normal life. We had nothing to lose … and we owed it to her to at least try," explains Chris.

Sasha became a regular at the VMC to receive her radiation treatments and the hospital staff adored her.

"It was just like that old TV show Cheers when Norm walks through the door and everyone says his name, except in this case everyone in the clinic said ‘Sasha!'" recalls Dana, "And oddly enough, Sasha actually enjoyed going to the clinic for her treatments. It was not stressful for her at all."

Palliative intent radiation therapy is designed to not cause any side effects since the goal is to improve quality of life. Palliative protocols usually involve delivering a few large doses of radiation over several weeks, minimizing the time that the pet spends away from its family.

Throughout Sasha's radiation therapy, Dana and Chris felt her quality of life was the same as before she was diagnosed with cancer. She was still able to do the things she loved – going for walks, barking at strangers outside and stealing cookies off the counter when no one was watching.

Sasha was able to live a normal life for six more months, but her quality of life started to decline in the last month. As was expected, the cancer in her lungs had progressed and was now making it difficult for her to sleep at night.

"She would wake up in the middle of the night and lean against the bed because it was easier for her to breathe standing up than lying down. At this point we knew it was time to let her go," says Dana.

In March 2005, Dana and Chris chose humane euthanasia for Sasha.

Dealing with Sasha's cancer took an emotional toll on Dana and Chris. However, they both agree that if put in a similar situation with a future pet, they would still choose palliative radiation therapy. They never viewed the process as trying to prolong Sasha's life; instead it was about making their beloved pet as comfortable as possible for as long as the cancer would allow.

Evelyn Muma of Regina, Sask., is a third-year veterinary student who was part of the WCVM's Undergraduate Summer Research and Leadership program in 2015. Evelyn's story is part of a series of stories written by WCVM summer research students.