During the summer of 2016, I spent two months at this isolated camp while conducting research on Arctic fox under the supervision of Dr. Emily Jenkins, a professor in the Western College of Veterinary Medicine's (WCVM) Department of Veterinary Microbiology.

Environment Canada maintains the field camp, which is located on a colony that includes over a million nesting lesser snow geese and Ross's geese within the Queen Maud Gulf Migratory Bird Sanctuary. Although the research focus was initially on these geese, Arctic foxes were eventually added to that mandate; Dr. Jenkins and her research team became involved in studying the health of these Arctic foxes.

Accompanied by a group of Environment Canada researchers and volunteers, I arrived at camp on May 20 in a Twin Otter airplane that flew from Cambridge Bay. Our first task was to dig out the cabins from some very deep snow, and one was even partly filled – thanks to a bear break-and-enter over the winter.

For the rest of May and early June, I worked alongside my assistant Audrey Tremblay and biologist Gustaf Samelius who has many years of experience working with the foxes. We trapped adult foxes on various dens around the colony – the same den sites that the foxes have used for centuries. We baited the traps with sardines — irresistible to winter-hungry foxes — and watched from tents placed about 100 metres away. Once the foxes were trapped and sedated, I collected blood and fecal samples while Gustaf placed ear tags on the animals as part of a long-term mark-recapture study.

Our work is part of an ongoing study on the protozoan parasite Toxoplasma gondii in the Karrak Lake foxes. Commonly known as the "cat litter" parasite, it has an unusually high prevalence in some Arctic wildlife and in people despite the absence of cats – the definitive host of the parasite – above the tree line.

"Toxoplasmosis affects Inuit in Nunavut and Nunavik (northern Québec) at a rate [of] at least two to four times that of the North American average," explains Émilie Bouchard, a PhD candidate at the WCVM. "Toxoplasma gondii can cause problems in the immunocompromised and in the fetuses of women infected for the first time during their pregnancy, and [the parasite] is considered a threat to conservation for some wildlife such as sea otters."

The blood samples that I collected from the adult foxes and their pups were tested for exposure to T. gondii, adding to information gathered over many years of monitoring this population of marked individual animals. In 2016, none of the pups or their mothers were positive for exposure to T. gondii, consistent with previous findings that young pups can get the parasite from their mothers even before they are born rather than from food consumed around weaning.

Team members also analyzed the fecal samples to characterize the gastrointestinal parasite fauna in the Karrak Lake fox population. As climate change causes rapid changes in the Arctic environment, the data gathered this year will be used for future comparisons of parasite diversity. 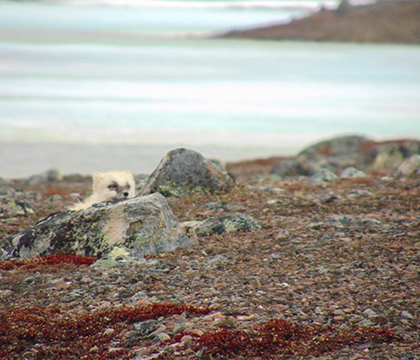 While Jenkins and her team members have collected data on gastrointestinal parasites in the foxes in past years, this was the first year that they investigated parasite fauna of the juvenile foxes. Coccidian oocysts were present in 82 per cent of samples from fox pups, as well as roundworms and hookworms in six per cent of pup samples. These parasites are likely transmitted from adult foxes to pups through fecal contamination, and they could have an impact on pup health.

I also tested fecal samples deposited by adult foxes that I collected opportunistically from dens. With these samples, I could compare the 2016 parasite diversity to that of past years – a means of investigating the variations that have occurred in the foxes' gastrointestinal parasites over time.

Future studies could simultaneously monitor environmental factors (such as climate) and ecological factors (such as fox density or movements of migratory species) to determine what might be affecting the parasites found in the foxes.

In early June as the snow began melting and the geese began to arrive on the colony to nest, it was quite spectacular to see the landscape transform so rapidly and dramatically. What began as barren, frozen Arctic was quickly overrun with nesting geese as well as shorebirds, long-tailed ducks and beautiful king eiders.

In time the tundra also became inundated with adorable goslings. This is the best part of the summer for foxes as the geese and their eggs and goslings present a significant food source for them. Unfortunately, that meant the foxes were no longer interested in our sardine bait, so that was the end of our season of adult fox trapping.

The next – and most exciting – step of our research work was to trap fox pups. We found pups at three dens, and I placed trail cameras on the dens to watch the young foxes' first steps into the wider world. It was fortunate that we found pups this year as fox breeding is largely dependent on lemming populations, which follow a cyclic pattern of peaks and crashes. Nursing pups had little interest in food bait, but since they were very curious and naïve, we simply used objects such as hanging bones or feathers in the trap to stimulate their curiosity and lure them in.

Even though we had to tolerate obscene numbers of mosquitoes, sitting outside all evening watching fox pups run around, wrestle and play was a pretty great job. They are extremely cute and always highly entertaining.

My two months spent in the Arctic were hugely rewarding – an opportunity to experience nature's beauty while carrying out important work that can benefit both the environment and the human population.

Keaton Schmidt of Saskatoon, Sask., is a second-year veterinary student who was part of the WCVM's Undergraduate Summer Research and Leadership program in 2016. Keaton's story is part of a series of stories written by WCVM summer research students.
Share this story

How much is enough? Public knowledge and the microbial world