"Horses do not do well with inflammation," says Anderson, who completed her PhD program on the equine inflammation topic in 2015. Her graduate supervisor was Dr. Baljit Singh of the Western College of Veterinary Medicine's (WCVM) Department of Veterinary Biomedical Sciences.

"We are trying to better understand the inflammatory process starting at the cellular level. From there, we can work on determining why horses are so susceptible, and how to appropriately deal with equine inflammation in the future."

With Anderson's help, I approached the issue of equine inflammation from the unique angle of a simple variable — temperature — during my work as a summer research student in 2015.

The specific goal of my research was to better understand how equine neutrophils (a type of circulating white blood cells) function with and without exposure to infectious agents at various incubation temperatures.

Anyone who has experienced a bacterial infection knows that with inflammation comes pain, redness, swelling and heat. Neutrophils are one of the major players in the process of inflammation.

They're activated by numerous possible signals — including chemo attractants released from other innate immune cells — or by the invasion of foreign material such as bacteria. Neutrophils migrate to the site of infection where they then exit from the vascular system into the surrounding tissue. In the tissue, the white blood cells undergo physical changes and begin engulfing the foreign agents to fight the infection.

Neutrophils can destroy the engulfed material via many of its toxic cytoplasmic substances (material in a cell), or they can release toxic substances into the surrounding area. They complete their defensive role by a process called apoptosis, which is essentially cellular suicide. Neutrophil apoptosis initiates the resolution of inflammation. However, if there is excessive inflammation, neutrophil apoptosis is delayed. This process delays the resolution of inflammation and may contribute to excessive damage to local cells and tissues.

Previous temperature studies targeting neutrophils are largely focused on humans and rodent species — but there's a thirst for knowledge surrounding temperature management and therapy in horses. 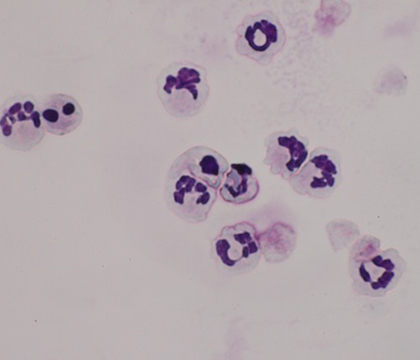 Temperature is often a disregarded factor in veterinary research. For many projects, researchers are studying the outcome of a specific treatment and require temperature to be strictly controlled. However, what's often lacking is a further evaluation of new therapies under different physiological situations — such as under different temperatures — that reflect real-world scenarios.

In this study, we isolated neutrophils from blood samples collected from healthy horses. The purity of these samples was assessed using morphological microscope cell counts. Half of the neutrophils remained untreated while the other half were treated with E. coli lipopolysaccharide — a major part of the cell wall of gram-negative bacteria that has been found to delay apoptosis of equine neutrophils. We split treated and untreated neutrophils into three groups and incubated them for 24 hours at temperatures of 37°C, 35°C and 39°C.

Through the use of several laboratory techniques, we were able to analyze the effect of temperature variation on the occurrence of apoptosis in cultured equine neutrophils. We also analyzed how it affects delayed apoptosis triggered by E. coli lipopolysaccharide exposure.

Based on the results of this study, we may be able to better understand, at the cellular level, how we should respond to febrile or hypothermic temperatures in clinical situations. We may also determine how to better apply temperature therapy to benefit the equine patient, such as during surgical procedures or by applying treatment for common equine conditions such as laminitis or sepsis.

Jacqueline Harrison of Whitehorse, Yukon, is a second-year veterinary student who was part of the WCVM's Undergraduate Summer Research and Leadership program in 2015. Jacqueline's story is part of a series of stories written by WCVM summer research students.