The Facility for Applied Avian Research is a combined indoor-outdoor research space set to open on May 1.

Spanning close to 350 square metres, the facility has six indoor bird rooms and 12 outdoor enclosures, capable of holding a large variety of bird species such as songbirds, waterfowl and raptors.

Tucked behind the Western College of Veterinary Medicine's Bovine Facility on Veterinary Road, it is one of only two such facilities in Canada capable of advanced research on birds, as well as the only facility of its kind dedicated to the studies of avian wildlife ecotoxicology and medicine.

Upon starting at the U of S in 2010, biology professor Christy Morrissey—who is also the principal applicant for the facility—had a vision to do more captive research on wild birds.

"Most of our research capacity is on aquatic animals, so we have a lot of that," she said. "We have an animal care facility mostly for small mammals to do health research, but no dedicated space to work on wildlife and no dedicated place to work on birds, other than poultry."

Along with co-applicants John Giesy and Dr. Karen Machin, both from the WCVM, the facility received infrastructure funding from the Canada Foundation for Innovation. Thanks to some internal contributions from the College of Arts and Science, the School of Environment and Sustainability, and the Office of the Vice-President Research, Morrissey's vision is now taking flight.

"The whole concept of the facility is to do multidisciplinary research on wild birds—that could be anything from ecology and migration studies to toxicology work and veterinary medicine."

"Everything is magnified for them," explained Morrissey. "They're smaller, their life spans are shorter in many cases and they are so dependent on their environment. Even subtle physiological changes, like the ways that chemicals are interacting with their immune system and endocrine system, are all signaling problems, potentially for us, too." 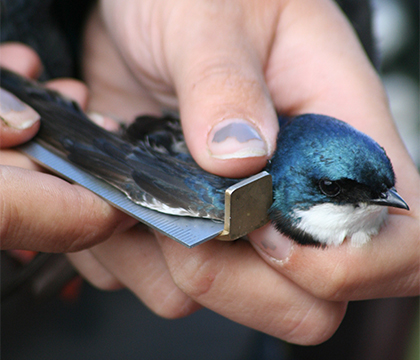 Besides magnifying potential environmental stressors, birds are highly visible—lots of people have backyard bird feeders or are birdwatchers—and well-studied in terms of their ecology, perhaps more than any other group of organisms on the planet, added Morrissey. Yet many, including song birds and long-distance migratory species, are declining very rapidly.

Morrissey's main research focus is primarily environmental contaminants, such as pesticides and industrial pollutants, and how these affect avian physiology and ultimately their ability to reproduce—things that "are just really hard to study conclusively in nature," she said.

For that reason, she hopes the facility will make headway in identifying some of the major threats to birds and how they can be mitigated through conservation action.

"It might seem counter- intuitive bringing birds into captivity—how is that conserving birds?—but you need to study a small number of individuals," said Morrissey, explaining that many birds do well in captivity. "Many species are quite happy to be suddenly fed, to be frank."

Additionally, testing birds in a captive setting can weed out a host of variables encountered in field studies.

"As a researcher, trying to control and figure out what is the problem is really difficult," she said. "If we study them we can have a better understanding of what's going on with a whole suite of other species that maybe aren't as well studied or well known."