"For me the veterinary end of the animal is always the back end," said McCorkell, who practised as a veterinarian for 14 years before taking up graduate studies with Adams at the U of S and then securing a faculty position at the University of Calgary.

"I've practised on anything from fish to camels — you'd be surprised what you find in rural Alberta."

Seals, however, are something new. A pregnancy test on the three-metre, 400-kilogram marine mammals involves carefully inserting an ultrasound probe nearly a meter long through the rectum and up the lower digestive tract. Understandably, the seal in question is unlikely to hold still for such a procedure.

Fortunately, the "seal team," as they are called by the other 800 or so scientists and support personnel at McMurdo Station, have come prepared. A hoop with a cone net and canvas hood at the end goes over the seal's head, which quiets the animal long enough for a team member to administer a sedative to put it to sleep for the duration.

"This is not as easy as it sounds," said Adams, a professor at the U of S Western College of Veterinary Medicine who pioneered the use of ultrasound pregnancy testing in seals.

"They'd rather not have a hoop over their head and they weigh as much as a cow," he explained — and the animals tend to spin and urinate as a defence. "We sometimes get swept off our feet in the process!"

Once the seal is safely unconscious, project leader Jennifer Burns, a seal specialist from the University of Alaska, moves in with her colleagues. Over the next two hours, they will collect data from time-depth recorder tags attached to the animal's flippers, take blood and other samples, weigh the animal, and take other measurements such as blubber thickness and body heat radiation.

Then it is time for Adams, McCorkell and Shero to move in with their rectal probe.

"I've found the easiest way to get access is to dig a hole in the snow under the animal," McCorkell explained. That permits examination of the animal in a normal position, and all the organs are where they are supposed to be. 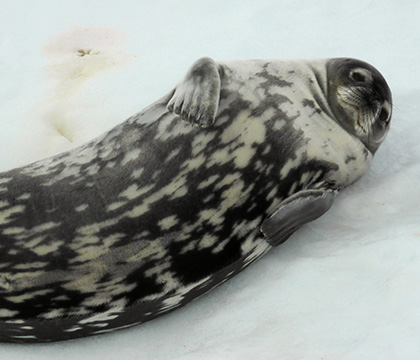 The last hurdle is actually seeing the ultrasound display, which is no match for the brilliance of the Antarctic summer.

"The sun never sets and the reflection off the ice shelf can be blinding." Adams explained. "Have you ever tried to watch TV outside?"

Their low-tech but effective solution is a blanket, arranged as an ultrasound tent. But a hole in the snow, in the dark, behind a seal, is a challenging environment in which to work.

"Some animals have diarrhea," McCorkell said. "But all is forgiven when we find a baby on the screen."

Detecting those babies has been a missing piece in research on Weddell seals, Adams explained, despite their being the subject of study since 1969 — "the longest continuous field study of a long-lived mammal in existence."

"We know when they pup and roughly when they breed, but the rest is a black box," he said.

Thanks to the Canadians, this box has been opened for the first time, filling in a significant gap for Burns. She is working to understand how Weddell seals manage energy demands in one of the most extreme environments on earth.

Summer on Ross Island is bright and stark, a bare, windy land devoid of vegetation contrasting with snow and ice and the smouldering cone of Mount Erebus, the southernmost active volcano on Earth, as backdrop. Temperatures average about -10 C. Winter brings total darkness and average temperatures of -30 C. The waters around the continent, however, offer rich hunting for the seals.

"The reason this is so important is the success of any species depends on energetics; that is, food and body condition, and reproduction," Adams explained. "Because of the inability to diagnose pregnancy status, the all-important linkages between energetics and reproduction in these wild species could not be made."

McCorkell explained reproduction is an energy-intensive process for any species, but particularly so for Weddell seals.

Females conceive around Christmas time, carry their pups for 10 months, give birth, and nurse them with milk that averages 60 per cent milk fat (compared to about 3.25 per cent for homogenized milk from the grocery store).

"It's basically fat transfer," McCorkell said. "They're born at 45 to 60 pounds and are only with their mothers for six weeks max. At the end of that they're 200 pounds, so they pile the weight on."

For Adams, who specializes in animal and human reproductive science, the road to Antarctica started 20 years ago through a successful collaboration with Ward Testa at the University of Alaska using ultrasound to look at moose. Further studies with Yukon and Alaska government agencies with caribou paved the way for an invitation to examine northern fur seals off the coast of Alaska's Pribilof Islands.

"It turns out the ultrasound procedure works well with wild pinnipeds (seals and their like) in the field — under conditions just as harsh as with the ungulates; that is, cold and snowy," Adams said. "It appears word is now out among Alaska biologists that this 'new' procedure is very accurate and informative for studies of population dynamics of wild species and is non-invasive and safe."

The word spread to Burns, who was searching for a way to fill in a gap in her data.

"She asked if I would be a co-investigator on an NSF-funded project on Weddell seals in Antarctica," he said. "Sure!" 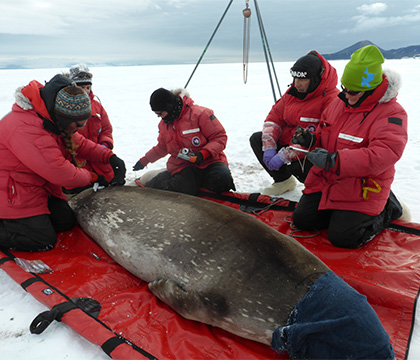 One challenge was the time required — about six weeks. This was more than Adams could fit in among his other research and teaching commitments, so he called McCorkell, his former PhD student and an experienced veterinarian.

The two visited Vancouver Aquarium to get McCorkell some hands-on experience with pinnipeds before heading south — a 16-hour trip to Christchurch, New Zealand, followed by another eight hours via U.S. Air Force Hercules transport plane "salted around the cargo like garnish."

Adams and McCorkell now split up their Antarctic duties, with each taking a three-week shift. They have also trained Shero, a postgraduate fellow from the University of Alaska, to do the procedure.

While they have begun to fill in some blanks in Burns' data on energy use in Weddell seals, they've also discovered some intriguing quirks in the world's southernmost mammal.

One concerns diapause, a poorly understood phenomenon where an animal will conceive, the embryo starts to develop, but then stops. It stays in this state of suspended animation for a while, then re-starts, ostensibly to time birthing at a time of the year where they have better chance of survival.

"To date, it is thought that all seal species have embryonic diapause," Adams said. "However, our work in Weddell seals challenges that notion. If they have diapause at all, it is extremely short."

Graduate finds her own path in veterinary medicine and research

New flight pen is for the birds’ rehabilitation