"The best available science suggests that the status of these caribou is one of a large and self-sustaining population, perhaps one of the most secure of all boreal caribou populations in Canada," says wildlife ecologist Philip McLoughlin, who leads the study with fellow U of S biology department researcher Jill Johnstone.

The findings are contained in the interim report of a five-year study into the population dynamics and critical habitat of threatened woodland caribou in the remote region. The report presents Canada's first glimpse at data on the population size, trend and amount of critical habitat available to the caribou population in the northern third of the province.

The report, submitted to federal, provincial and other partners, is part of a required schedule of studies under the 2012 federal recovery strategy for boreal woodland caribou in Canada, which specified the end of 2016 as the deadline for receiving data for the region. Until now, the region was the only caribou range of 51 in Canada to be determined as "unknown" with respect to population data and definition of critical habitat. The final report is due in 2018.

Ultimately, the research is expected to help the Saskatchewan government develop a range management plan for woodland caribou within Environment and Climate Change Canada's national recovery strategy for the species. 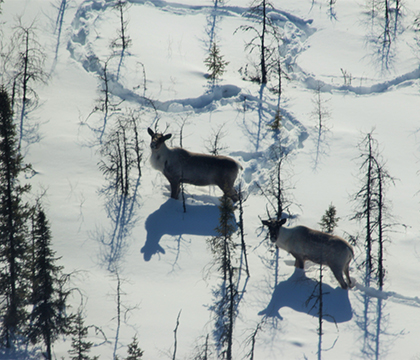 The project involves sampling vegetation, mapping important caribou habitat, and tracking woodland caribou and their predators, including wolves and black bears. To date, more than 150 caribou and 38 wolves have been captured and collared for tracking movements and determining rates of survival and reproduction. Research on black bears in the region, which also may prey on caribou, is currently underway.

Unlike other areas in Canada where caribou populations are declining, populations of predators such as wolves and moose appear low, likely contributing to the size of the population. Preliminary estimates suggest that up to 5,000 woodland caribou may live in the region—one of the largest populations in Canada.

The population occupies some of the most pristine habitat available to non-migratory, forest-dwelling caribou in Canada, with very low levels of human disturbance. About half the study area is characterized as high-quality caribou habitat, mainly old growth pine and black spruce forests and bogs.

"It is rare to find woodland caribou, which are a threatened species, living in near the same conditions as they did historically. Learning about the population in this state presents conservation biologists across the country with a benchmark for understanding caribou dynamics," says McLoughlin.

The U of S received more than $2.2 million for the project from a consortium of government and industry partners, including grants from the Natural Sciences and Engineering Research Council (NSERC's Collaborative Research and Development program), Western Economic Diversification Canada, Environment and Climate Change Canada, and the Saskatchewan government. The total project is budgeted at roughly $3.5 million in cash and in-kind support over five years.

The full report is available at: http://mcloughlinlab.ca/lab/lab-publications/