Freeman is dean of the Western College of Veterinary Medicine (WCVM) at the University of Saskatchewan (U of S) and is the first dean of a Canadian veterinary college to serve in this role. He was installed as president during the AAVMC's annual business meeting on Aug. 8, 2016.

"It's a great organization that serves academic veterinary medicine very well, and I am honoured to take on this role with the AAVMC," says Freeman. "I look forward to continuing our work to better serve the profession and veterinary medical education, as the association marks its 50th year – especially since the WCVM was one of AAVMC's founding members."

"The AAVMC enables colleges to come together and address the needs of the profession, the direction of academic veterinary medicine, and of course, the needs of students. It's the premier organization to promote veterinary education," he says.

Freeman sees this new leadership role as a chance to actively engage with issues in veterinary practice and education. The AAVMC brings together leaders of the veterinary profession across North America and tackles major issues including college accreditation, One Health, student debt and wellness. It participates with colleges and organizations globally – including the World Organization for Animal Health (OIE) – to address the worldwide promotion of animal health and to support veterinary education and services in developing countries.

Freeman first became an institutional representative with the AAVMC while serving as a department head at North Dakota State University in 2002. It was at this time that he also became active in the area of One Health, a movement that fosters interdisciplinary collaboration among professionals involved in animal, human and environmental health. 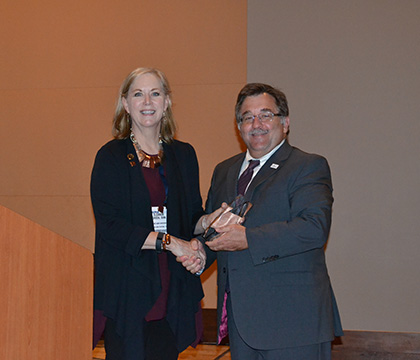 As his interest in One Health broadened, so did his involvement with the AAVMC that has become a recognized leader in the One Health movement. The organization has actively supported partnerships between North American schools of public health and veterinary medicine.

Freeman eventually became a member of the AAVMC board of directors and then an elected officer, serving as its treasurer and president-elect before becoming the organization's president.

"It's important for all of us to step up and give back when we have the opportunity," he says.

As dean of the WCVM, Freeman has worked extensively to build collaborations across health science disciplines, colleges and departments. On top of his efforts to promote One Health, he has participated in the development of a number of key partnerships across campus including the U of S One Health Leadership Experience, the One Health Initiative, the Global Institute for Food Security, the Sylvia Fedoruk Canadian Centre for Nuclear Innovation and the new Livestock and Forage Centre of Excellence.

Freeman completed a Doctor of Veterinary Medicine, a clinical residency and a Master of Science degree in theriogenology at the University of Minnesota. He earned his PhD degree in reproductive physiology from the University of Idaho and is a Diplomate in the American College of Theriogenologists (ACT). Freeman has worked at multiple universities across the United States and in New Zealand, and his career experience also includes private veterinary practice and veterinary professional services in the animal health industry.

In addition to the AAVMC presidency, Freeman serves as a member of the board of directors for the Vaccine and Infectious Disease Organization-International Vaccine Centre (VIDO-InterVac) at the U of S. He is a past-president of ACT and a former Fellow of the American Council of Education.

Health information in the veterinary world