But that's an example of what distinguishes the work of the Canadian Wildlife Health Cooperative (CWHC), which celebrates its 25th anniversary this year.

The Vancouver Rat Project is led by Dr. Chelsea Himsworth, a diagnostic pathologist and the CWHC's regional director for British Columbia.

She says in the past 100 years virtually no progress has been made in ridding cities of rats. "And I think that's partly because we kind of try and sweep it under the rug rather than deal with it in a scientific way."

Her approach reflects the organization's overall aim: to gather and use knowledge about health and disease in wildlife for the purpose of improving the health of animals – both wild and domestic – as well as people and the environment.

Inspired by the American National Wildlife Health Care system, Wobeser and Leighton created an organization devoted to wildlife conservation and management in Canada through the collaboration of Canada's four (now five) veterinary colleges. The two pathologists became co-directors of the CWHC, and later, Leighton became its first full-time executive director.

In 2007 the World Organisation for Animal Health (Office International des Epizooties or OIE) designated the CWHC as its first international collaborating centre in the area of wild animal health and disease. OIE collaborating centres provide research, expertise, standardization and dissemination of techniques within their specialized areas. What CWHC brings to the global table is its expertise in wildlife disease surveillance and monitoring, diagnosis, epidemiology and management.

The organization "is the model to which many countries aspire to be," says Dr. Craig Stephen, who became CWHC's executive director in 2014.

The CWHC works with provincial veterinary laboratories in Canada as well as a host of other federal, provincial and non-governmental agencies that share a common interest in wildlife health. 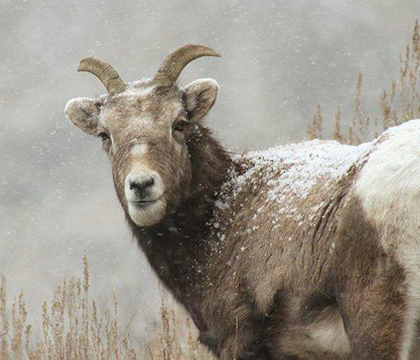 About 40 per cent of the CWHC's funding comes from federal partners, and 30 per cent from provincial agencies. Another 30 per cent comes in the form of in-kind support from universities, including access to laboratory space, time spent by faculty as CWHC directors and work performed by graduate students.

The CWHC's organizational model – regional centres embedded in universities and sharing expertise and information with its partners – has a particular benefit, Stephen maintains.

"Many countries around the world not only see the model as an interesting way, but [they] also see some of the concepts, some of the tools that we've developed as leading-edge issues," he says.

By providing a national voice and perspective for wildlife health, the CWHC fills a unique niche, Stephen says, adding that there is no other single organization across Canada with that mandate.

The sharing of information across regions also helps to build a consistent awareness. The harmonized surveillance program for white-nose syndrome, a disease of bats, is an example: "People in Saskatchewan can have the same confidence that that sort of problem can be found, as people in Nova Scotia."

Here are other recent examples of CWHC's wildlife health activities:

CWHC also enables Canada to meet its international obligation to have a national wildlife health surveillance system, and in a cost-effective and efficient way. CWHC's output "is way beyond the investment that's been made in it," Stephen says.

And, out of this synergy "emerges all these important questions that have funded innovative research, provided opportunities for grad students, that have helped faculty build their careers, and have really positioned the veterinary schools at the leading edge of conservation issues."

Himsworth's career is a case in point.

After earning her veterinary degree from the WCVM in 2007, Himsworth became a graduate student in the college's Department of Veterinary Pathology. Her supervisor was Dr. Ted Leighton, and while working with the CWHC, she spoke with him about how little was known at the time about rat populations in Canadian cities.

Up to then only one study had been done using a sample of about 60 rats at the Richmond, B.C., landfill in the 1980s, leaving a host of questions unanswered. 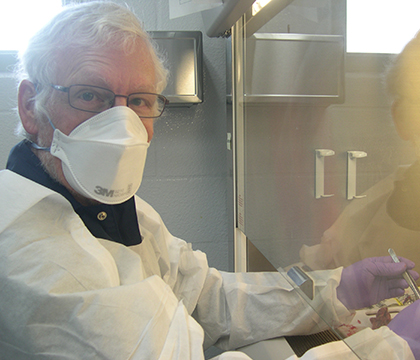 "Basically Dr. Leighton said ‘This is an excellent subject for a PhD [degree]. Why don't you go for it and see if you can make this happen?'" says Himsworth, who went on to develop the Vancouver Rat Project as part of her PhD program at the University of British Columbia (UBC).

Now she is a faculty member at the UBC School of Population and Public Health, supervising a team of graduate students who continue to work on the project.

It's a broad investigation into an array of questions: the current size and distribution of urban rat populations, patterns of disease and transmission, impacts of the environment and how rats respond to extermination efforts. The project also looks at which people are most affected by rats and in what ways.

Along with veterinarians, Himsworth also has students in the fields of ecology, entomology, medicine and environmental health working with her.

She says it demonstrates how the CWHC is "way, way ahead of its time in recognizing that one person, or organization, [or] one discipline alone cannot solve all these problems."

Meanwhile, the City of Vancouver has requested the CWHC's help in building a program to tackle rat infestations in a "holistic and effective way," using all the information generated by Himsworth and her team.

Thus, the project is the ideal example of how CWHC projects can link basic biological research with public policy development.

Wildlife biologists routinely bring in dead animals for examination by pathologists such as Daoust, and the results may indicate a general problem in a species population.

Whales hit by ships or caught up in fishing gear, parasites killing off purple finches and the discovery of whirling disease in Alberta trout are among the examples of cases that CWHC team members have investigated in the past.

"I know for sure, I am totally convinced that we have filled a very important niche. And we are told that on an almost regular basis by the professional biologists who use our services," Daoust says. 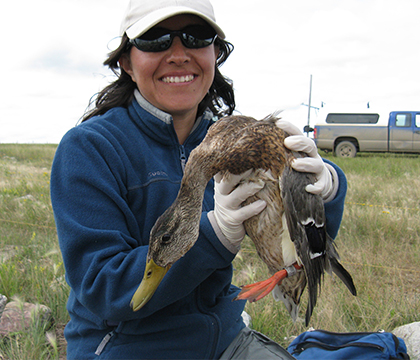 He hopes that by documenting mortality among wildlife populations – particularly deaths caused by people — governments and wildlife agencies will introduce measures to mitigate the damage.

At other times, the CWHC has engaged in targeted surveillance programs such as monitoring West Nile virus in birds.

In the CWHC's 2015-16 annual report, Stephen wrote that in a year of economic challenges and political change in many jurisdictions across the country "the question came up several times of whether or not investment in wildlife health is good public policy."

To that, he answers that the value lies in the protection of trade, along with the safety and security of everyone who interacts with nature.

Meanwhile the CWHC continues to evolve, shifting beyond the questions of "Why did this die?" and "Where is this spreading?" to preventing problems before harm happens and achieving that goal through a more collaborative and co-ordinated approach.

In February, the CWHC made a presentation to all of the federal, provincial and territorial ministers responsible for the environment. "And they have agreed that Canada requires a national approach to wildlife health," Stephen says.

The CWHC has been asked to report back in 2018 with a plan and a budget for a more robust and sustainable wildlife health program. That assignment has Stephen excited about the new possibilities that lie ahead for the CWHC and its network of partners across the country.

Article produced by Kathy Fitzpatrick. Kathy Fitzpatrick is a freelance journalist in Saskatoon. Born in Manitoba, she has spent close to four decades working in media — including radio, television, print and digital.

National Day for Truth and Reconciliation