Excess weight can lead to serious health complications such as the development of insulin resistance – a condition linked to type 2 diabetes in people and equine metabolic syndrome (EMS) in horses.

Unfortunately, owners often don't consider their own horses as being overweight. A combination of overfeeding and lack of exercise can lead to excessive weight gain that's detrimental to a horse's health.

Early recognition of insulin resistance (or insulin insensitivity) would encourage owners to manage their animal's weight and prevent complications such as EMS — and researchers at the Western College of Veterinary Medicine (WCVM) are hoping to help. Led by Dr. Julia Montgomery, the research team is investigating tests originally designed for early detection of insulin resistance in people that have been modified for use with equine patients.

To determine if a horse is at risk of developing metabolic syndrome, a veterinarian evaluates the animal's body condition, medical history and presentation. EMS-positive horses have typical characteristics that include obesity or fat pads that appear in certain areas such as the neck, tail head, behind the shoulder or near the mammary gland region.

Most importantly these horses exhibit insulin resistance, meaning that they don't respond to insulin in a normal way. They also have a higher than normal concentration of glucose in their blood. 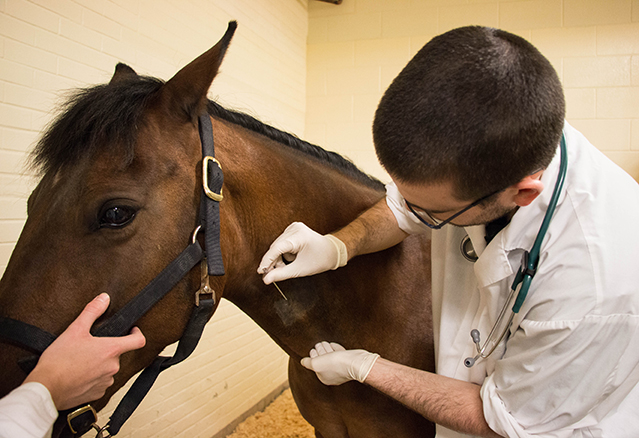 Right now, veterinarians use a combined insulin-glucose tolerance test (CIGTT) to determine insulin resistance. But this test has standardization problems and can be difficult to administer.

Developing an accurate and rapid blood test would allow veterinarians to detect insulin resistance earlier so they could intervene before serious problems — particularly laminitis — could develop.

Horses with insulin resistance are predisposed to laminitis, a condition that causes the tissues just underneath the hoof wall to become inflamed and lose their ability to adhere the hoof capsule to the hoof bone.

Both veterinarians and horse owners are focused on preventing this extremely painful and life-threatening condition that's difficult for the owners as well as their animals. Tammy Hayward of Montmarte, Sask., recalls the wrenching pain of watching her horse, Abby, suffer from laminitis.

"While waiting for the vet, I couldn't hold it together anymore – I had never seen a horse in the pain Abby was in – I was crying so hard I could barely breathe. She could not walk even a step," says Hayward, who is participating in the WCVM study.

Since protocols for testing these biomarkers have been described in people but not in horses, the study is exploring the viability of using these tests in equine patients with the goal of developing a standardized test that veterinarians can use for an earlier diagnosis of insulin resistance.

If the biomarkers prove to be reliable indicators, the test would be a major step toward the early detection of EMS. Once veterinarians can detect EMS in its early stages, they can treat the disease before serious complications arise that cause horses to suffer. Montgomery and members of her team are hopeful that their work will ultimately improve the quality of life for many horses in the future.

Colby Klein of Regina, Sask., is a third-year veterinary student who was part of the WCVM's Undergraduate Summer Research and Leadership program in 2016. Colby's story is part of a series of stories written by WCVM summer research students.