Things didn't look good for the two-year-old Great Pyrenees, especially when temperatures dipped below -30 degrees Celsius. The couple began checking with neighbours to see if anyone had found Sookie's body.

Then, on Christmas Eve, Hamilton and Kunard heard something thumping against their deck.

Sookie had come home – with a snare trap locked around her frozen front right paw.

"It was frozen solid, it just went ‘thunk, thunk' when she walked. I knew for sure it would have to be an amputation," says Hamilton.

It was an agonizing day. Kunard stayed at the hospital until the emergency team stabilized Sookie. The next day, the family faced a difficult decision: remove Sookie's entire leg or take a chance on a partial amputation and a prosthetic limb — an option they'd never heard of before.

"I was so worried. That was my biggest fear. What if we do all of this and then she won't use the prosthetic?" says Hamilton.

Sookie's family was able to go ahead with the surgery and plan for a prosthetic limb — thanks to donations from the community and the Good Samaritan Fund. Administered by the veterinary college, the fund pays for medical treatment at the WCVM in situations where animals are ownerless or where owners are unable to fully pay for their pets' medical care.

Small animal surgeons amputated the dog's foot just below her lowest, distal joint. They then took Sookie's carpal pad – a small pad similar to the toe pads, located above the paw – and transferred the tissue to the bottom of her stump.

"Because her carpal pad was still alive, we could just move it down and make a nice stump for her in preparation for a prosthetic limb," says Dr. Jiaying Ng, a small animal surgical resident at the WCVM.

For the next month, the family made the 280-kilometre round trip to Saskatoon multiple times a week while Sookie's wounds healed, then Sookie began rehabilitation at the WCVM. The priority was to ensure that the dog would use her injured leg once the prosthetic arrived.

"It was kind of taking a shot in the dark to see whether Sookie would use the leg. You can't really predict how each animal will adapt," says Ng, who oversaw the dog's case as she healed.

Clinicians in the WCVM's rehabilitation service helped Sookie get accustomed to using the injured limb by doing stretching exercises, massage and  conducting laser therapy on her healing leg.

Sookie's family also did a lot of "homework" — massaging and stretching the dog's leg and ensuring she was comfortable. They worked hard to encourage Sookie to extend her amputated leg so she would be ready for the prosthetic leg once it arrived.

"By the time her prosthetic came, she was already trying to use her limb to balance herself," says Dr. Kira Penney, clinical associate and certified canine rehabilitation therapist at the WCVM. 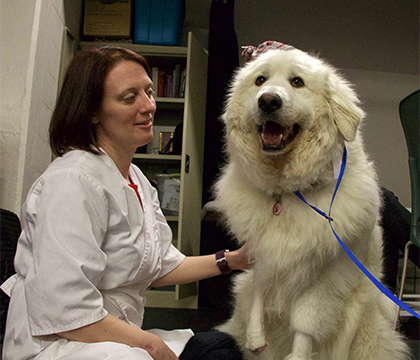 When Sookie's wound was nearly healed, Penney and a team of veterinary technologists and students created a cast that the Colorado-based company OrthoPets used to custom-build Sookie's new leg.

One big question still lingered — would the prosthetic even work?

When the leg finally arrived, the anticipation was high.

Clinicians, veterinary technologists and veterinary students gathered around to watch the initial fitting. As usual, Sookie came around to greet each person in the room. She stood patiently as the team wrestled her new limb on for the first time.

And then, without any hesitation, Sookie took off – walking on her new leg as if it had always been there.

"The first time we put that prosthetic on, she just started walking like a champ," says Penney.

After the first fitting, Sookie started the slow process of growing used to her new leg, and in early May, Sookie's clinical team gave her the all-clear.

After thousands of kilometres travelled, months of visits to Saskatoon and hours of rehabilitation and stretching exercises, Sookie is ready to live the rest of her life as a well-loved pet alongside the other animals at her home. While she won't go back to her duties as a guard dog, the experience has turned her into a patient and trusting house pet.

"I think her future looks as good as any dog. With this prosthetic, she can get anywhere she needs to be. It's really giving her the best quality of life, and I'm so happy she has that," says Kunard. "She manages well when it's off in the house, but we know that when this is on her, she's at her best."