“It was about four by five centimetres on the top of his head — basically bigger than his skull,” says Dr. Danielle Zwueste, a board-certified neurology specialist at the WCVM Veterinary Medical Centre. She describes the tumour as relatively rare: “It was a multi-lobular tumour of bone, a tumour that most often arises from the skull.”

Toby’s owners, Norma and Kelly Tait of White Fox, Sask., first noticed a pea-sized bump on Toby’s head in January 2018. They initially assumed he had hit his head on something, but as the bump kept getting bigger, they consulted their veterinarian at Northeast Veterinary Services in Tisdale, Sask.

When more tests were needed to determine the cause of the lump, their veterinarian, Dr. Mike Evenson, referred Toby to the WCVM’s Veterinary Medical Centre. The Taits and their dog met with resident Dr. Charles Boisclair who ordered a CT (computed tomography) scan to determine the exact location of the mass.

When Boisclair showed the CT images to Zwueste, she was confident that she could remove the tumour. “Aside from having the big mass there, the dog was doing really well. He was eating and drinking and didn’t seem to have any pain. So I had a chat with the owners and they decided to go forward with surgery.”

Zwueste compares the tumour to a mushroom with a very short stalk. After removing the top of the mushroom in quarters, she had to take off the top of Toby’s skull where the tumour had attached, being careful to get all of the tumour and its margins. 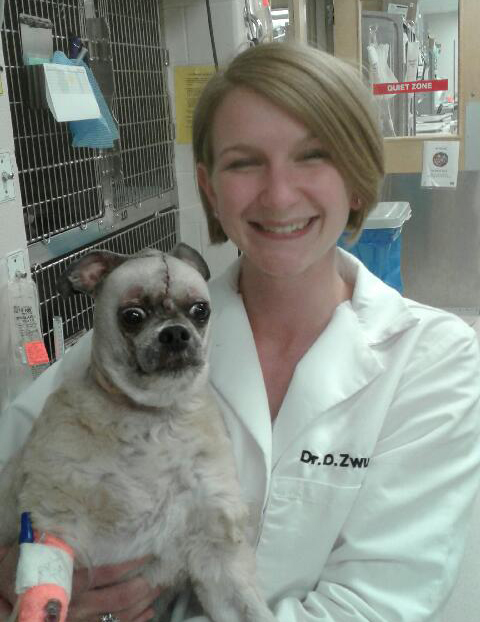 Once Zwueste had covered Toby’s exposed brain with a foam to keep it moist and protected, she used bone cement to recreate the skull before closing the incision.

“The day after surgery, he was up and walking around his kennel and wanting to get out and go for walks,” says Zwueste. “He was really quite bright, and it didn’t seem painful. Aside from the incision on his head, you wouldn’t have a clue that he’d just had major skull surgery.”

Although the Taits had returned to White Fox two days after the surgery, they received regular phone updates from the clinic and were pleasantly surprised when they got the call that Toby was ready to go home after only four days in hospital.

Once he was back at home, Toby quickly resumed his regular routines and tricks. “He enjoys the outdoors,” says Kelly, who’s really happy to have his little friend back. “He likes to ride on my quad. I’ve got a seat up in the back for him and a little cushion where he’s comfortable and he just loves going for rides.”

Both Kelly and Norma are grateful for the care Toby received at the Veterinary Medical Centre, and they really appreciated the clinical team’s helpfulness. When Toby returned to the teaching hospital for a check up three weeks after his surgery, the Taits were delighted to find that VMC staff had honoured their little dog as the “Star of the Week.”

“Everyone stopped what they were doing and came to visit him,” says Norma. “They were all so excited to see him, and they called him the star of the week — he was their star patient.”

“We had such peace of mind,” adds Kelly. “We can’t thank the people at the vet college enough. Dr. Zwueste was awesome with us. It’s such a comfortable atmosphere, and they’re the best of the best as far as we’re concerned.

National Day for Truth and Reconciliation